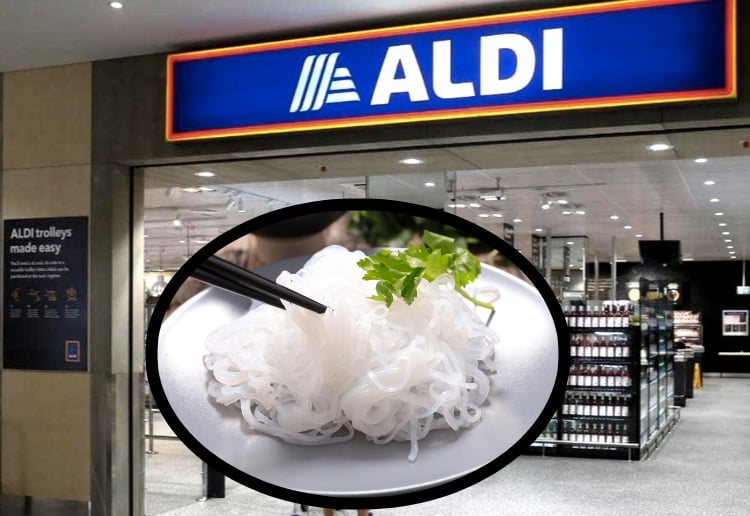 Ok, so the headline may be a bit dramatic…but I thought it had a good ring to it! The latest Aldi noodles special buy is causing a fierce debate and opinions are divided whether you should buy this product or not!

Coeliacs rejoice as the next lot of Aldi special buys on Wednesday 5 August is a collection of natural health and gluten-free products. There is gluten-free pasta, superfood powders, seeds, nuts and even gluten-free bikkies.

But the product that is causing all the controversy is the ‘healthy’ Aldi noodles made out of Konjac. Just in case you aren’t familiar with konjac, it’s actually a plant, colloquially known as the ‘Devil’s Tongue’. Konjac has been used in Japanese food for centuries and Western culture has finally twigged onto its value.

They May Be Slimy But They’ll Keep You Slim

But there is a BUT!!! When you first encounter Konjac, I have to admit, they’re off-putting. The noodles are white or transparent and bathed in strong seafood smelling water. The noodles are slimy and slippery to touch and don’t look that appealing. But appearances are deceiving. All you need to do is drain, then rinse the noodles thoroughly under cold running water and the fishy smell disappears. Place the noodles in a bowl of hot water and they’re ready to go. Now boiling or lengthy preparation needed at all. Once you add the noodles to your sauce, you can barely tell the difference between real pasta and konjac.

Best of all, each packet of Konjac is only 12 calories per 125 gram serve. The equivalent amount of spaghetti would blow up the scales at 200 calories! Wow, that is a MASSIVE difference and the biggest reason to switch to Konjac.

The Aldi noodles on sale are the Be Right brand and are available as thin spaghetti or thicker, flatter noodles. The price is just right at $2,49 per 400g pack. I usually buy the Slendier range from the health aisle of the supermarket as they have a wider range of Konjac (including angel hair, rice and even lasagne sheets) but they are more expensive at around $3.90 per pack.

Should I Buy The Aldi Noodles?

One Aldi fan asked her fellow shoppers on an Aldi mums facebook group what they thought about the Aldi noodles and the conversation went nuts.

While those in the know sang the praises of the low-carb Aldi noodles, others were dismissive and down-right rude about the konjac range. The comments were brutal:

“I don’t like them. I think they have the consistency of mucous. And they smell,” said one.

“The smell is overwhelming and it has the texture of a slimy worm,” commented another.

“LOL! I call them vagina noodles,” said a disbeliever!

Others suggested using zucchini noodles or soybean spaghetti instead.

Make Up Your Own Mind

I suggest you should go out and buy a packet and give them a try for yourself. They may not be the real deal but the certainly won’t make you fat.

Are you keen to buy the konjac Aldi noodles? What do you think of konjac noodles? Tell us in the comments below.