Article Aldi Vs Kmart School Shoes – Which Ones Are Best?

With all the festivities over, it’s time to think about back to school. Buying school shoes for my three costs the earth – especially as the girls always want Mary-Jane’s as well as black sports sneakers. So this year I’m thinking of going the cheaper route and buying the kids either Aldi or Kmart school shoes.

I’m talking massive savings here! While the average pair of “branded” school shoes costs at least $100 or more, the Aldi and Kmart school shoes start at around $15. That means it could cost only $45 to equip all my children with shoes.

But…and there’s a BIG BUT here. The kids wear their shoes five days a week so I know it’s important that the shoes aren’t poor quality as they not only may be uncomfortable but they could also damage their feet. And that’s ultimately way more expensive to fix.

So I checked in with mums who’ve bought both Aldi and Kmart school shoes to see what they think.

Aldi’s back to school range will hit the shelves as part of the special buys on Wednesday 13 January.

There are four different pairs of Aldi school shoes on offer – ranging from the Mary Jane’s and lace-ups or Velcro straps for $14.99 to the premium school shoes for $29.99. There are also leather joggers for $17.99. Seriously, what a deal – I’m tempted to start lining up now!

But, are they any good?

Overall it’s a bit of a mixed bag – many mums give them a big thumbs up, while others don’t think they’re a good idea.

Posting on the Aldi mums facebook group, mums share that they are generally impressed with the longevity of the Aldi school shoes.

“They are amazing! The past couple of years my kids have had them and 1 pair lasted them the whole year. For my first child (who is now 12) I thought I’d buy him expensive school shoes, but they only lasted 1/2 way through the year. I highly recommend these Aldi ones,” one mum raved.

“We bought a pair and they were really good, lasted for ages. My other ones that were much more expensive didn’t seem to last anywhere near as long. My daughter found them comfy too,” said one.

“I always get them. Last way longer than the expensive ones. I get the next sizes up as well.”

“They are absolutely fantastic. I have had 2 kids go to year 6 and year 5 in Aldi school shoes and I have never had to replace them during the year, they’ve never broken and never gotten a hole in the sole. I’ve watched friends expensive brands fall apart by second term.”

Other buyers weren’t that impressed:

“I bought them for the first time last year and the leather didn’t last longer than 1.5 terms (on 2 different pairs of shoes!…) it started peeling where the toe crease/fold is… wont be buying again.”

“I got the Mary Janes for my preppy last year and they only lasted 6 months buckle broke and Scuffed in the first week.”

“Not worth it. Velcro is terrible and I didn’t like the quality at all.”

“Omg I hate them! Everyone recommended them but my daughter destroyed the lace up ones in one term! Usually I buy the $100 ones at shoes and sox but as we we’re almost at term 4 I thought why not give aldi ones a go, and they barely held it together for term 4 .. the outside layer completely peeled off and holes appeared on the inner side within 10weeks. I’d rather buy one pair a year than 4 or 5.” 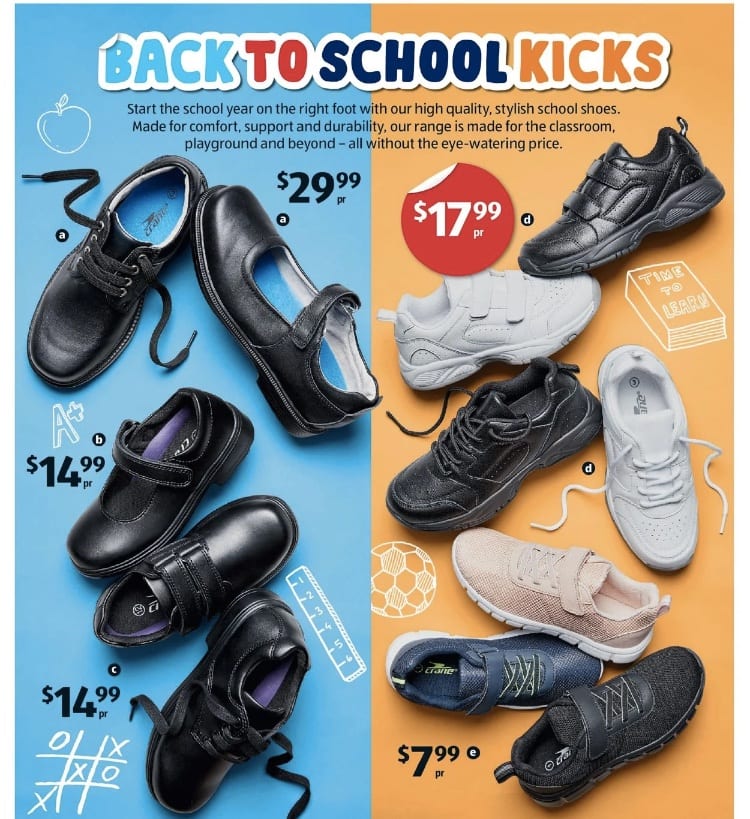 Buy In Bulk To Save

Others say that while the quality to mediocre, the price is top notch and many parents buy multiple pairs to use throughout the year. Even buying 3 pairs at $15 each, works out to be less than $50 – which is still a significant saving on more expensive branded shoes.

“We’ve used the Mary Jane shoes they scuff quickly so need to polish the fronts. The velcro also comes away about half way through the first term. We buy multiple pairs to replace through the year.”

“I’ve brought them from Aldi 2 years in a row, I get the 14.95 ones for boys and girls, I always buy 2 pairs each kid as they tend to always need a new pair but 4th term and they are great!!! I use to get grosby and Clark’s but these are just as good”

One mum warns:
“Just remember they may last but that doesn’t make them good for her growing feet. Make sure you do your research on what is good for her feet as well as what lasts.”

Another mum agrees:
“No way would I buy school shoes from ALDI or anyone else without having them properly fitted. Yes- sure it’s more expensive than the cheap shoes but in the long run I’ve worked out it’s worth the cost as they have growing feet and if they’re not fitted properly they can get bunions and other foot issues. After all, they pretty much wear their school shoes more than any other shoes they have.”

Kmart School Shoes: The Good, The Bad & The Uncomfortable

Now, what about Kmart school shoes? The advantages of Kmart is that you don’t have to get to the store at 6am and wrestle your way to get a pair of shoes. They are available right now – starting from a very economical $15 and going up to $24 for the senior range.

Similar to the basic Aldi shoes, the Kmart school shoes have leather uppers and synthetic lining and come in Mary Jane styles as well as lace-ups and velcro straps.

So, what do mums think about Kmart school shoes?

Many were happy with the shoes in general.

“We’ve had kmart school shoes the last 2 years and never had any problems,” said one mum on the KMART Hacks and Decor facebook group.

“My daughter wore those shoes last year when she started prep they lasted her all year,” said another mum.

“After buying expensive shoes that don’t last as she grows out of them to quickly I went with this pair last year and was pleasantly surprised. Yeah, they aren’t the best but she liked them and they lasted a couple of terms so for the price I couldn’t complain at all.”

“I spent 120 dollars one year for a pair of laced school shoes for My daughter who goes to private school. They didn’t even last 2 terms. I bought a pair of 15 dollar kmart shoes they lasted a year.”

“I have brought more expensive brands and they have disappointedly not lasted longer than a cheaper pair.”

Better In The Bin

Others pretty much said that the Kmart school shoes were rubbish.

“Lasted my daughter a week before the Velcro tore off and she had a hole in the toe.”

“Lasted a couple of weeks then needed new ones.”

“Your best off buying a good pair of school shoes my boys use to always get Kmart ones and every few weeks they needed a new pair.”

And The Winner Is…

Quite a few in the Kmart school shoe discussion actually recommended the Target leather shoes ($45) and the Aldi ones over the Kmart ones.

So while there are many opinions and experiences in this fiery debate, it looks like that out of Kmart and Aldi, the Aldi shoes are the ultimate winner.