The baby girl was delivered at the Yifu Fuyuan Hospital, in East China’s Zhejiang Province, by means of a caesarean section, and Uncle Xiao Zhou said they only noticed the injury later that day, reports The Mirror.

Xiao Zhou said: “I didn’t pay attention to it at first because I thought it was made by somebody’s nail, but upon closer inspection, it was clear that it was a knife wound.”

The child’s mum says she worries about the potential psychological effects her daughter may suffer because of having such a long facial scar. 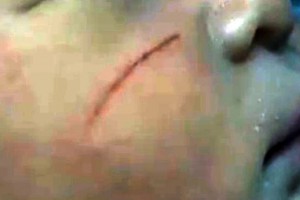 The delivery team apparently told Xiao Zhou that the flesh and skin on his sister’s stomach was “too thin”, causing them to accidentally slice too deep and injure the newborn.

But the girl’s uncle said the hospital has been avoiding openly discussing the topic, just in case it has any negative legal implications for the facility.

Xiao Zhou said: “They never openly and proactively said it was their fault and they’re not taking responsibility.”

The doctor who performed the C-section, surnamed Zhang, refused to comment on the surgical cut, saying that anything she says will have to go through the hospital.

Officials at Yifu Fuyuan Hospital said the case has since been handed over to medical investigators, who will have final say with their ruling.

Last month we shared a story of Parents left furious and in total shock after a surgeon accidentally sliced their baby’s head at birth leaving her with a huge scar. When we shared this story many of our own followers shared their own similar stories of bub being nicked during delivery.

Although rare, foetal injury during a c-section can occur. The most common injuries are lacerations (cuts), which sometimes happen when the incision is being made in the uterus. Most cuts on the baby don’t need stitches, and they usually don’t leave a permanent scar.

There are several risk factors that increase the chances for foetal lacerations during a C-section delivery. The principal risk factors include:
•Ruptured membranes before the C-section
•Low transverse uterine incisions
•Active labour
•Emergency C-section
•Inexperienced surgeons or residents