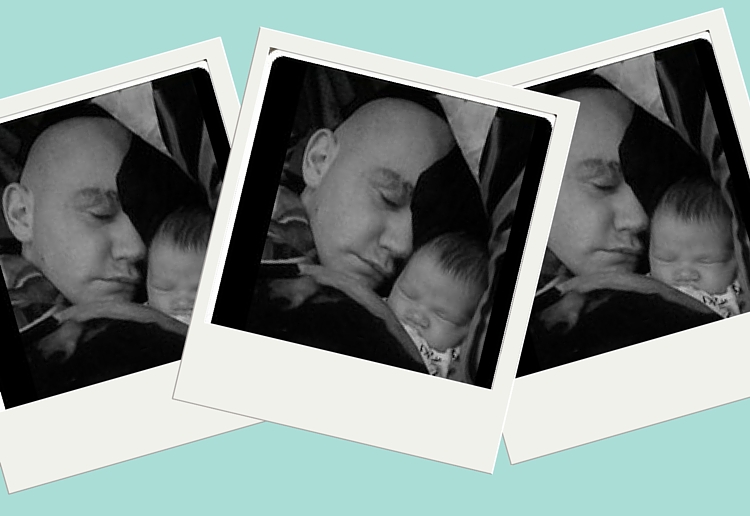 There seemed little chance that he would survive the Taliban bomb, let alone ever become a father.

According to the Daily Mail, when the bomb hit in the Helmand province, soldier Shaun Stocker, then 19, was blinded, lost both legs and his reproductive organs.  His hopes of ever becoming a father were dashed as he concentrated on recovering and simply living day-to-day.

But now, pioneering British scientists have changed his future forever.  Shaun is a proud father of his first child, born on Christmas day.

Baby Theo has been dubbed a “Christmas miracle”, by his parents, Dad Shaun and Mum, Persia Haghighi.  Shaun, now 25, was at his fiance’s side throughout the 32-hour labour, which saw baby Theo weighing in at 8lb 7oz.

Shaun told the Daily Mail that “Theo is the son I never thought I’d be able to have.”

When Shaun suffered his life-long injuries from the Taliban bomb explosion in 2010, he was placed in an induced coma to help his chances of survival and recovery.  It was then in the first few hours after the blast that doctors used a revolutionary new technique known as sperm salvage which meant that Shaun could become a father in the future.

Although Shaun lost his testicles in the explosion, medical staff were able to take healthy sperm from a tube called the vas deferens, which is located deep enough within the body to protect against even the extensive injuries Shaun had suffered.

While he remained in the coma, the sperm was frozen so that he could one day have the opportunity of becoming a father.  Previously, before this procedure was made available, soldiers who lost their testicles in explosions were unable to conceive children unless they had already frozen sperm before going to war.

“I’ve spent the past five years recovering from my injuries and getting myself fixed up physically so I’d be able to look after a family. I feel like now I have everything a man could want.  I knew I’d love Theo, but I never knew I’d love him this much. I’ve never been happier. It’s amazing.”

Shaun has undergone more than 50 operations since he stepped on the IED. He spent time in Sydney in 2014 having surgery to fit prosthetic legs to the remaining bone in his thigh, before being discharged on Christmas Eve that year. Five operations have also restored 30 per cent of vision in his right eye.

‘We couldn’t believe it,’ Persia told the Daily Mail. ‘To be able to have a baby at all after everything Shaun has been through felt like a miracle in itself, but to be told our baby was due on Christmas Day felt even more poignant.In the run-up to Christmas, I don’t think either of us thought it would actually happen on Christmas Day itself because due dates are rarely precise.”

“We’d like three more children at least,’ Persia explained to the Daily Mail,  “Theo is such an easy baby. He loves his daddy holding him. If he’s crying, as soon as Shaun picks him up, he stops crying and settles straight way.”

“He’s sleeping well at night and he seems very content. He was born with a striking, full head of hair and beautiful blue eyes. I want him to have brothers and sisters. As soon as he was born, I said to Shaun, ‘I want more.”