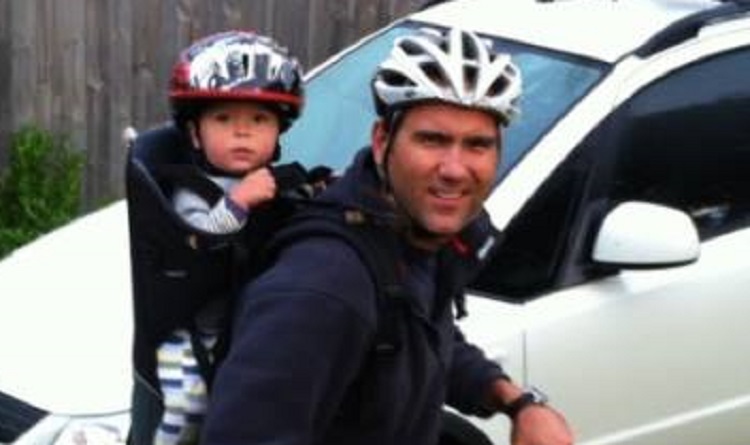 Paramedic and Father of three, Pete Keach never expected to call time on his own baby boy’s life.

Herald Sun reports, Little Sam, 21 mths, went to bed at 7pm. Mum Georgie heard him call out at about 8.30pm, around the same time Pete’s pager alerted him to an emergency.

Pete was driving to Dandenong Hospital at the same time that Georgie popped into Sam’s room to check on him at 9.15pm while making her own way to bed.

“Nothing had been odd that day, so I didn’t expect I would find him like he was,” Georgie said.

“I found him face down and I know a lot of babies sleep like that, but he never did.

“I turned him straight away — I have never seen someone die before but I was pretty sure he was dead, but was hopeful that wasn’t the case.

“I called the ambulance straight away but I knew that Pete was working in the local ambulance (so it was out of town).”

Pete was racing along Frankston Freeway when the night’s second emergency call came over the radio: a 21-month-old infant was in cardiac arrest and in the most desperate need of help.

Pete knew if it wasn’t his own son it would be a friend from their mothers’ group.

When his calls to Georgie went unanswered he radioed the 000 dispatcher and was told to switch to the clinician’s channel where Pete was told the gut-wrenching news.

“There was a pause and he said ‘yes Pete, it is your address’,” he said.

“Forty-five minutes earlier I would have been home and able to respond to it.

“I would have been the closest ambulance, so they dispatched the next closest, which was coming from Mornington, 35-40km away.

“I got to hear the call, the initial situation report, so I knew what the rhythm of his heart was.

“Babies’ hearts usually stop for an unknown reason so my instant thoughts were for Georgie, because I knew there was not much that could happen for Sam and she was home alone. That was more distressing for me.”

Unable to respond, Pete was helpless as he listened to the terror unfold over the radio.

Pete called a neighbour skilled in first aid to run to his home and help Georgie with CPR until an ambulance arrived.

A local ambulance busy with a non-emergency patient also heard the drama unfolding, stopped what they were doing and made their way to Rye to cut the response time to about 20 minutes, while an air ambulance was enroute.

But it wasn’t enough, Pete made the heartbreaking decision to call time on his own son’s life over the phone.

“I don’t think anything could have been done,” Pete said. “When the first crew got there Sam’s heart was flatlined, there was no activity of life.

“I was still in clinical mode, which was surprising.

“I thought he had been dead for an unknown time until Georgie had found him, another 20 minutes before the ambulance got there, his chances of survival are literally zero.

“Once I heard he was in asystolic arrest I called the clinician up and said ‘I don’t think we should continue the resus any more’.

“That would have meant the helicopter would have taken him into the city, it would have been invasive (with) tubes in his throat, needles in his bones and, at the very least, you think of severe brain injury and those sorts of things.

“Whether that was the right move to make, I am not too sure; however, that is what happened and that is the clarity we had at the time.

“I am not bitter at myself or doubting anything, it is just what happened at the time.”

“When Pete was on the phone to the paramedics I could see they were uncomfortable in that Pete had made that call, and they felt they needed to be appearing to help for my sake because we hadn’t had that conversation in person together,” she said. 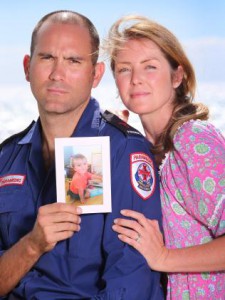 Almost four years after the horror night, Sam’s death is classified as a sudden and unexpected death in infancy, or SUDI.

To help Pete and the Sydney2CAMberra riders support SIDS and Kids and the Stillbirth Foundation Australia, visit here.

Image via SIDS and Kids