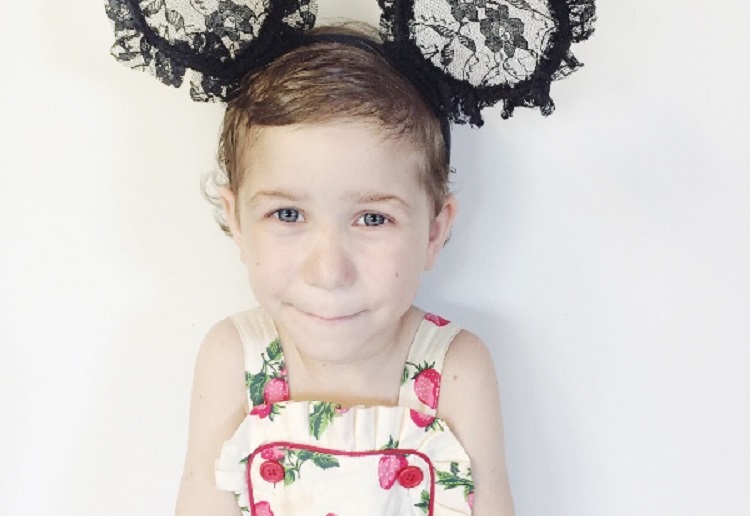 The power of social media strikes again. Facebook helped this mum finally get a diagnosis for her little girl.

The Daily Mail reports of a family who had been visiting doctors for years to get a diagnosis for their sick little girl only to find the answer they had been searching for just 24 hours after asking for help on social media.

Michelle Blomley’s daughter, Isabella, was not growing at the typical rate for a child. At nearly six years old, the little girl was the size of a ‘normal’ two-and-a-half year old.

Doctors conducted tests on the girl, from Humpty Doo near Darwin, but they all came back normal and didn’t show any abnormalities. 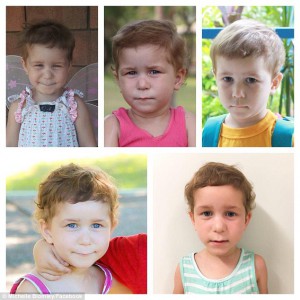 The mother was so sick of not having any answers she took to Facebook, where she found her answer in less than a day.

‘Does anyone know anyone who knows anyone that could help us find out what’s ‘wrong’ with Isabella??,’ she wrote.

‘Genetic and Chromosome tests that her Paediatrician has done so far have all came back ‘normal’ and not showing any abnormalities, her body also produces growth hormone and enough of it to make her grow, yet it seems she hasn’t aged since she was two years old.’ 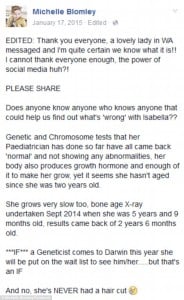 A woman from Western Australia saw the post after it had been shared into a mother’s group – and told the family their daughter had  Trichorhinophalangeal syndrome.

The mother knew this because she recognised the symptoms suffered by Isabella as the same suffered by her son.

That was a year ago – Mrs Blomley has since set up a Go Fund Me page so that she can fly to Minnesota’s Mayo Clinic in America with her husband, Isabella and her four other children to get answers.

There are only a few hundred people with documented cases of Trichorhinophalangeal syndrome world wide.

Michelle wrote on GO Fund Me that “Trichorhinophalangeal Syndrome (TRPS) in Chromosome 8,  is characterised by thin, sparse slow growing hair, unusual facial features, abnormalities in the fingers and/or toes, and multiple abnormalities of the “growing ends” (epiphyses) of the bones (skeletal dysplasia) especially in the hands and feet”.

We wish them all the best.