The World Health Organisation has declared the mosquito-borne Zika virus to be an international public health emergency.

The disease linked to thousands of suspected cases of birth defects in Brazil spreads rapidly.

WHO director-general Margaret Chan said an international coordinated response was needed to improve detection and speed work on a vaccine and better diagnostics, although curbs on travel or trade were not necessary.

“Members of the committee agreed that the situation meets the conditions for a public health emergency of international concern. I have accepted this advice,” Ms Chan said.

The WHO said last week the Zika virus was “spreading explosively” and could infect as many as 4 million people in the Americas. Brazil is due to host the Olympic Games in Rio de Janeiro in August.

Health minister Marcelo Castro said the virus cannot be transmitted from person to person, only by mosquito, but claimed the epidemic is worse than believed because in 80% of the cases the infected people have no symptoms. 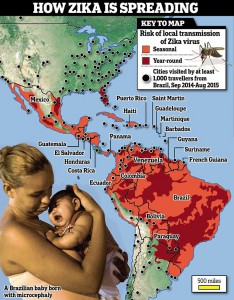 An Australian man was hospitalised in May 2015 with the Zika virus seven days after he was bitten by a monkey in Bali, although he was also bitten by mosquitoes on the trip.

The 27-year-old man presented to Royal Darwin Hospital with a fever and a rash. He was diagnosed with acute Zika virus. Transmission via bites from animals like monkeys is said to be “more frequent” than previously realised.

Meanwhile, Queensland’s Health Minister Cameron Dick told Daily Mail Australia that he was closely monitoring the Torres Strait as that was a likely entry point of the virus into Australia.

‘We’ll monitor closely through the Torres Strait. We already do that with a number of infectious diseases,’ he told reporters in Gladstone on Monday.

‘That would possibly be one path of entry into Queensland.’

‘My advice is that it’s not a significant risk to Queensland at this time,’ he said.

‘But we’re going to continue to monitor that.’

In Brazil, most of the mothers who had babies with microcephaly were apparently infected during the first trimester, but there is some evidence the birth defect can occur later in the pregnancy, CDC officials say.

The travel alert applies to women in any stage of pregnancy.