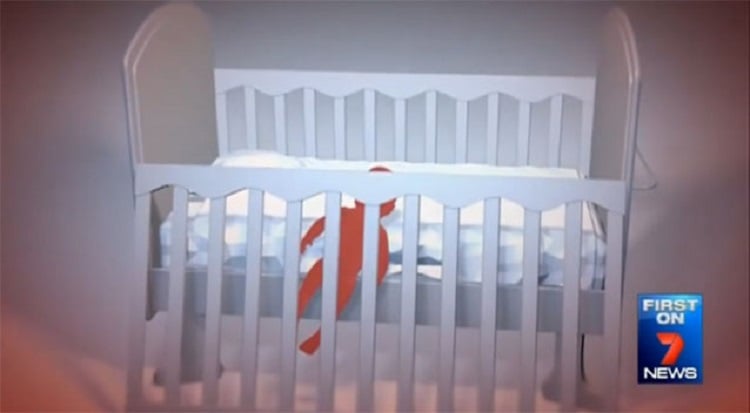 A grieving mother whose baby daughter died in a faulty cot is urging authorities to ban drop-side cots.

7 News reports drop-side cots are already illegal in America and there is growing pressure to stop their sale in Australia.

Carolyn and Colin Possamai cherish their baby girl Shania every day but they also relive the nightmare of finding her tiny sister limp and cold in her cot.

“Colin yelled out she’s dead and I thought she can’t be dead,” Ms Possamai said.
Ten-month-old Natanya had suffocated when her head was wedged between the bars of her cot and the mattress.

“It’s a grief that never really goes away,” her mum said.

Consumer affairs inspectors are determined to prevent more deaths. They are raiding markets and seizing unsafe baby equipment as part of a national product safety crackdown. There is only one thing to do with dangerous cots like these: destroy them.

“You really have to be careful that if you are given goods or you’ve bought them second hand that they haven’t suffered wear and tear,” Consumer Affairs Minister Jane Garrett said.

Natanya’s cot was a pre-loved gift. It looked safe but over time its sliding side had become loose and dangerous.

The problem with some drop-side cots is sliding rails can malfunction due to poorly made or over-used hardware.

This can create a space big enough for a baby to become trapped and suffocate. “We went and bought a fixed-sided cot and it’s easy to use and I tell you what, it’s a lot easier than losing a child,” Ms Possamai said.

In Victoria, a child is injured every three days in a cot accident.

The ACCC is currently reviewing safety standards and drop-down cots. The government has not ruled out a ban.

“Our responsibility is to keep our kids safe and if that is the outcome of the review then that is what will happen,” Ms Garrett said.

Such a tragic event.