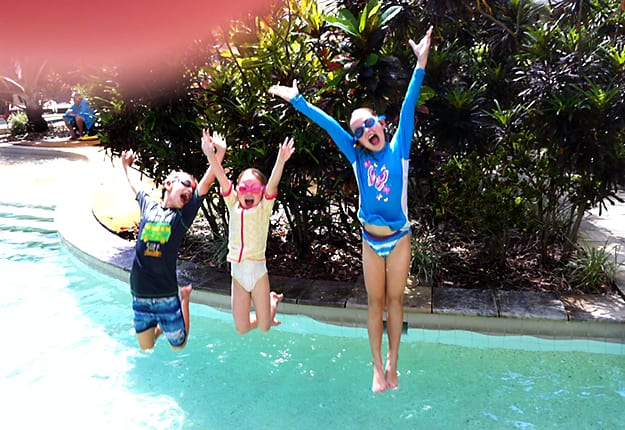 Going on holidays with kids is a bit of a mixed bag.

The first time we went away with S, she was 8 weeks old.  I packed everything.  At the last minute I even chucked the bassinet in the car.  I also had her rocker and entire wardrobe.

We were going away with two other couples, both were childless at the time. And both were amazed at the amount of stuff I’d managed to bring for someone who was 55cm, 5 kg and fully breastfed.

We got the biggest room in the cottage, because we had a baby, which was great.  Sadly, it was the beginning of a long series of trips away, which were simply the same baby/child related stuff in a different location.  Sometimes the locations were attractive.  But if your baby was up half the night crying, you didn’t care much.

Still, we didn’t give up and stay home, oh no!  Suckers for punishment, we continued, overseas, in Brisbane visiting family, at the beach, in the mountains.  I would try to put them to sleep in strange beds, strange bedrooms, putting cots in bathrooms, desperately creating makeshift curtains to block the early morning sun.  We tried to regain the feeling of holidays as we remembered them.  The sleep in, the book reading, leisurely meals, cocktails, general lazing about.  But we couldn’t.  It was an impossible dream.

Being in denial didn’t work.  Trying to pretend it was just like the holidays before kids just made it worse.  And I would get frustrated with having to pack every child’s bag, my own, all the food, toys and beach gear, while M sauntered out with his one bag and then told me I’d packed too much.

I remember having to squirrel away 13 month old J some milk every day, for his 5:30am bottle in the resort at Fiji.  He’d woken at 12:30am for an unexpected early milky and we had none in reserve.  The restaurant kitchen was shut, reception was quiet.  And J screamed “MILKEEEEE”for an hour and a half.

And once, as toddler S and baby J had their day sleep in our hotel room, I sat outside in the hallway and read my book.  Don’t ask me where Mike was.  Probably playing golf.  As I sat, enjoying my weekend away in a hotel hallway, I could hear a couple in a room nearby enjoying a spot of “afternoon delight”.  They went on FOREVER.  It was agony.

This was a definite low point.

Anyway, I can cheerfully report, having just returned from a week away, things have improved since those early days.  A definite turning point occurs after the youngest child is toilet trained, sleeps through the night and can swim.  To be safe, call it five years old.  It’s even better if they can operate a remote control.

We could sit by the pool and read, keeping an eye on them as they played, and occasionally go in with them, on our terms.  No bobbing around in the water with someone who clung like a limpet, or kept trying to take off their bubble and escape.

We could go out for dinner, not too late, but we could do it.  And they behaved fairly well.  On the whole.

In the mornings they’d put the TV on without disturbing us.  Eventually there’d be a fight over the remote and then someone would get dobbed on, but it gave us half an hour or so extra sleep first.

And they were fun to do stuff with.  They loved the rainforest, the waterfalls, the beaches.  Ok so they didn’t love snorkeling but maybe they’re a bit young yet.

I know I have to enjoy the years from now until they get cynical and don’t want to be seen with us so we’d better go on lots of holidays to make the most of it.  Can’t wait for the next one.