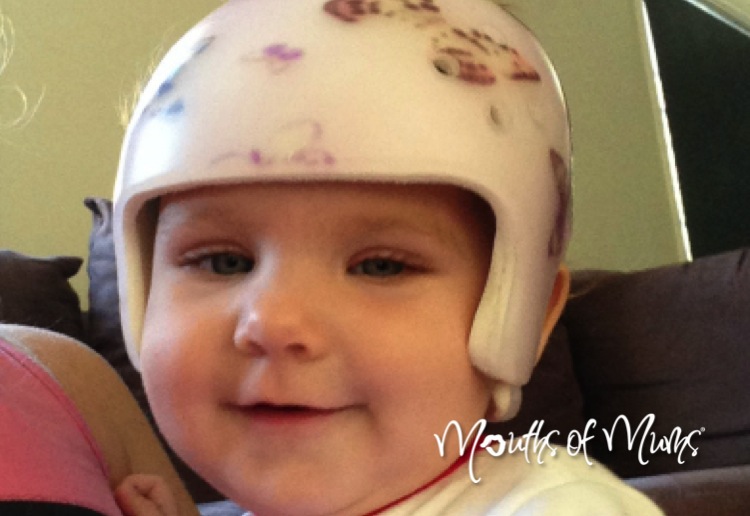 From the moment we laid eyes on her, our little bundle of joy was perfect. Well, she had some minor issues, but over all, she was perfect. It wasn’t until she was about nine months old, that a family member mentioned that she had noticed our baby’s head was constantly tilted to one side.

As soon as it was pointed out, I could see it, it was obvious; why had we never noticed this? Numerous physiotherapy and specialist appointments later, it was found that our daughter had issues with the muscles in her neck.

Then she was diagnosed with Positional Plagiocephaly or put simply ‘Flat Head Syndrome’. Basically, she had developed a flat spot on one side of her head and then on the other side, her skull was beginning to bulge out. This was a result of her favouring one side to sleep on, which had also affected the muscles in her neck. Physiotherapy was needed to help her neck muscles but her misshapen head would take more work. Because of her age, the plates in her skull had already begun fusing together, so the chances of her having a perfectly symmetrical head were slim.

Through specialists, she had a corrective helmet formed, which would be firm on the side of her head that was protruding, but have space to encourage growth from the flat side. The time spent wearing the helmet would be gradual at first, but by the end of the first week, she would need to be wearing it twenty-three hours a day, and for a time period of four to six months. This terrified me. What would people say? Would people stare at us? Would people laugh? My expectations of what would happen whist we were out in public were not positive and I didn’t take our daughter out for the first week of her wearing her helmet.

When we finally did venture out though, do you know what I discovered? No one laughed or ridiculed my beautiful baby, who was twelve months old by this stage. I think I can count on one hand the amount of times someone looked twice or stared, and that was ok, because we were doing what was best for our daughter and that was all that mattered. What I did experience though, was encouragement after encouragement. I had so many people come up to me when we were out, just to tell me that their child, or grandchild, or niece or nephew had had to wear the same kind of helmet and what a difference it had made to them. These people will never know how much their kind words meant to me, but I was so grateful for them.

We weren’t guaranteed full success in reshaping our daughter’s head because her skull had already begun to fuse and the helmet was simply manipulating the direction of growth, rather than remoulding her head. But after four months of our daughter wearing the helmet, we were so happy with the results. Our daughter is three now and although her head is not perfectly symmetrical, it is very hard to notice any abnormalities, especially with all of her Shirley Temple curls.

Flat head syndrome or Positional Plagiocephaly is an ever-increasing issue today. It is caused from consistent pressure to one spot on a baby’s soft skull. This pressure could come from lying in the same position in their cot or bassinet, or from lying in the same position on their bouncer or play mat. You can help prevent flat head syndrome though, by changing your baby’s position in their cot (changing which end they sleep at) and by changing their focus of attention by moving their cot mobile or something else they may focus on. Also, plenty of supervised tummy time is great for strengthening your baby’s neck muscles. You can speak to your local child health nurse or doctor if you think your baby might be developing a flat spot on their head or if their head looks asymmetrical.

Have you experienced this before? Please share your thoughts in the comments below.