Article “I Want To Kill A Wiggle” Jokes Famous Comedian 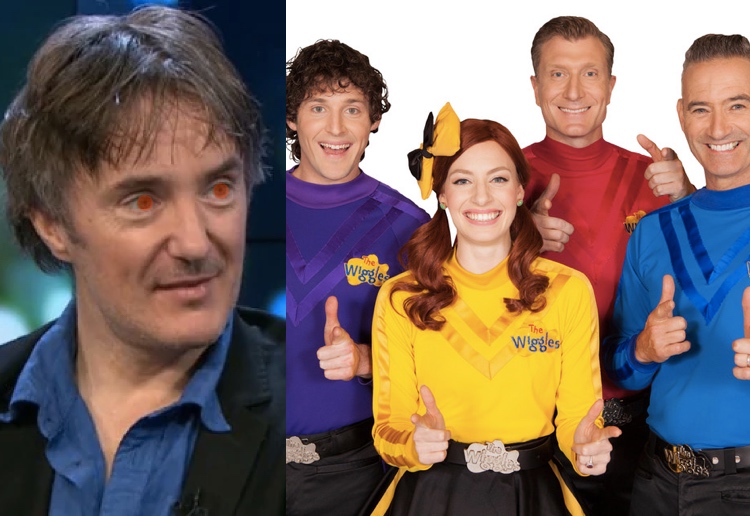 The Wiggles are belovedly Aussie as vegemite and kangaroos. But Anthony, Emma and co. better beware, ’cause Irish comedian, Dylan Moran, has a vendetta against the wholesome kiddy band.

You have to be pretty brave or just plain stupid to threaten our skivvy-clad Wiggles and I’m surprised that customs actually let the man back in the country after he joked about coming to Australia for the sole reason of “killing a Wiggle” in 2016.

But yes, he somehow wormed his way back onto our shores and was invited to chat to the Project panel.

In the interview, Tommy Little reminded him about his un-PC joke about the Wiggles demise.

“It’s a question of how to kill them,” he had previously quipped. “Anything that can smile for seven hours and display, no fatigue feels no pain…they have no hearts or blood or anything recognisably human.”

“They’re Up To Something!”

But it appears that Moran, who’s the dad to teens Siobhan and Simon, has “mellowed out” over the last few years and told the Project crew that if he saw a Wiggle now, “I’d threaten them and not actually do anything.”

He did admit though that he still had his doubts about the Wiggly performers, saying that they look like they’re “up to something.”

What Did The Wiggles Do To You???

“Did a Wiggle do something to you?,” Little asked.

“I felt they had an agenda. It was there. You could see it. You knew they were up to other things,” he said, making the studio audience erupt in laughter.

In the segment, Moran also talked about his recent decision to stop drinking and smoking.

“It became like a job. That’s honestly what it was like. It was like punching the clock. Here we go (mimes opening a drink) I just got bored, you know.”

Do you see the funny side of Moran’s humour? Tell us in the comments below.

Comedian Dylan Moran stopped by the desk and reveals how he mastered the art of the being the favourite child, how long he'd last in a world with extreme censorship, and doesn't hold back on his thoughts on Brexit. pic.twitter.com/EOg5D2ERtQ