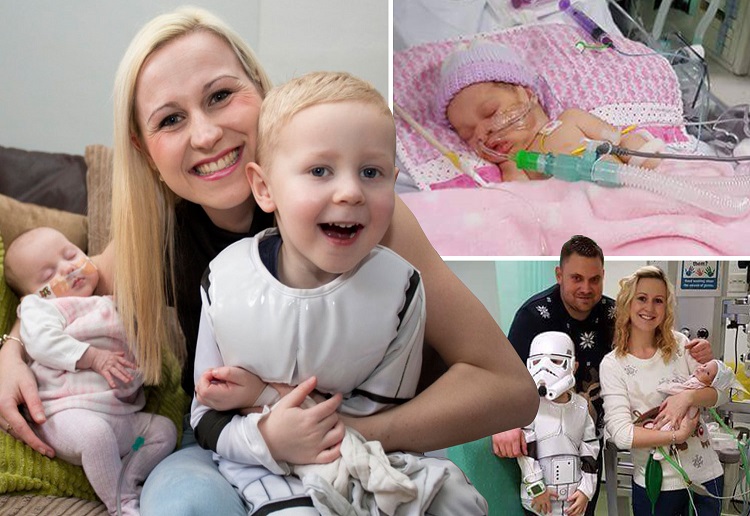 Mother’s heart stopped for seven minutes, triggering memory loss so severe she had to be reminded she had a daughter.

Louiser was 30 weeks, when she developed excruciating stomach, she  was taken to the Princess Royal Hospital in Haywards Heath, West Sussex, where a scan found her placenta had torn from her womb.

She suffered a serious haemorrhage and lost a litre of blood — a fifth of the amount in her body.

Louiser was transferred to Royal Sussex County Hospital for an emergency caesarean but during the op she reacted badly to antibiotics and went into anaphylactic shock.

Born ten weeks premature and weighing just 3lb, baby Olivia was whisked to an incubator as doctors battled to resuscitate her mum.

Louiser’s heart stopped for seven minutes and medics put her into an induced coma for the next ten days to help her body deal with the stress.

When Louiser came round, she had no idea she had given birth.

She said: “The last thing I remember is asking Charlie for the phone. I had no idea what was going on when I woke up in hospital.

“Oliver and the doctors had to tell me I’d had a daughter.

“It was upsetting. It’s so important for new mums to bond with their babies but I hadn’t even seen her.

“The nurses had compiled a birth diary for me explaining when Olivia was born, how much she weighed and what she had eaten while I was in the coma.

“As I had suffered memory loss from the trauma, they had to remind me who had visited each day. I woke up every morning and couldn’t remember what had happened the day before — or that I’d had a baby girl.

“I used to get really upset. Looking at my diary helped me piece it together.”

She told The Sun “There was a point when my family didn’t think I would pull through. Then I thought we’d lose Olivia. It has been a tough battle.

What a terrible experience for them all. Terrifying!