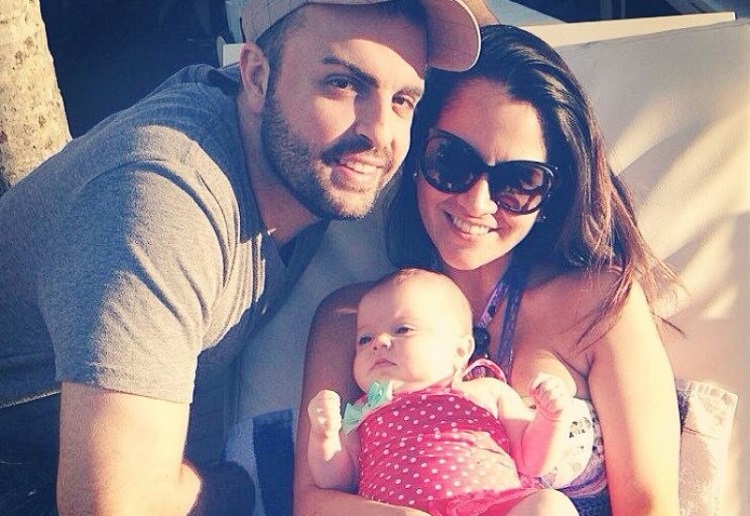 Fio Aguila, 32, from Beaconsfield, NSW, was told she had stage three breast cancer in May, but after undergoing surgery the mother of one has cancelled all her chemotherapy appointments saying, ‘you can choose quantity of life or quality – I choose quality’.

Ms Aguila said her partner Jared, 34, initially urged her to reconsider, but accepted her decision after she gave him an ‘ultimatum’.

She plans to travel to Mexico to undertake Gerson Therapy – a ‘natural therapy’ said to activate the body’s ability to ‘heal itself through an organic, plant-based diet, raw juices, coffee enemas and natural supplements.’

Her diagnosis came at a time when she was in a ‘really negative state of mind’ and was ‘tired and stressed’.

She woke up in bed one day to discover one of her breasts felt heavier than the other. ‘It felt like I was breastfeeding,’ Ms Aguila told Daily Mail Australia. ‘I thought it was related to my period.’

A mammogram and biopsy revealed she was suffering from ‘aggressive’ breast cancer.

‘At that time I was very ignorant of everything related to cancer and health. My father died from cancer more than 20 years ago,’ Ms Aguila revealed. ‘I never wanted to talk about it. I was blocking it from my mind this whole time.’

Ms Aguila, who is a mum to a little girl, Naia, two, said her initial reaction to the discovery of the tumour was ‘let’s get this thing out of me’.

She underwent surgery to remove the tumour – which was bigger than expected – but said her feelings about what treatment was right for her changed.

‘I was recovering for a couple of weeks and they told me that even though they were awaiting results of tests on the tumour they heavily thought chemo was a must,’ she said. ‘But I was having a weird feeling about chemo. I felt sick every time they were talking about it.

‘It was not fear,’ she went on. ‘It was the whole idea of feeling it did not feel right for me.’

Tests confirmed the tumour was aggressive.

‘That’s when they told me again. “It’s 100 per cent necessary that you have chemo and radiotherapy”,’ Ms Aguila said. ‘I was crying. I was devastated.’

‘They started to tell me about the possible side effects,’ she said. ‘Infertility, premature menopause, hair loss, sensitivity to infection… I thought, “am I the only person in this room that thinks that this is not right?”

‘My partner and I were talking and I said “I feel this is wrong”. He said, “are you crazy?”‘

Ms Aguila was told that without chemo, there was a 50 per cent chance of her cancer returning but that did not change things for her. Although she agreed to book in her recommended chemotherapy sessions, she left her appointment that day deeply unsure if she would proceed.

‘They were shocked,’ she admitted. ‘But I’m aware. I know what’s happening with my body and I’m just not sure this is the right decision.’

‘My family and my partner were thinking I was insane for even considering not having chemo,’ Ms Aguila said.

She candidly admits she gave her partner an ‘ultimatum’ and she told her family that if they pressed the issue it would drive her away.

‘I want them in my life but I would not be able to be with anyone who did not support the decision I made,’ she said. ‘I felt like I needed to do it that way. It was stressing me out. I’m not crazy.’

Having done further research, in early July Ms Aguila went to a hospital appointment where she told her doctor she was not going to have chemo.

‘I finally told her I’m not going to do this and it was like my whole body was vibrating, I was a ball of happiness.

‘This is not a decision I’m taking because I want to close my eyes. My eyes are more open than ever before.’

She said she thinks the life choices she made as a chef – including partying, travelling and stress – had a role to play in causing her cancer.

‘Even though I’ve changed a lot since I stopped being a chef, I cannot repay all those years,’ she said. ‘I did not know I was doing wrong until the cancer hit me.’

Now, in addition to drinking two litres of organic juice each day – including carrot, beetroot, ginger, kale and celery – Ms Aguila ‘cleanses’ her liver with two coffee enemas and supplements her diet with turmeric and aloe vera. She also exercises up to five times a week and practices yoga.

‘I’m feeling really great at the moment,’ she said. ‘A lot of people won’t agree or support what I’m doing but everyone needs to be confident and take a decision on what they think is right for them.

‘If you’re in the middle of a treatment you don’t believe in, nothing is going to save you.’

The Gerson diet is plant-based and entirely organic. The diet is naturally high in vitamins, minerals, enzymes, micro-nutrients, and extremely low in sodium, fats, and proteins.

The following is a typical daily diet for a Gerson patient on the full therapy regimen:
•Thirteen glasses of fresh, raw carrot-apple and green-leaf juices prepared hourly from fresh, organic fruits and vegetables.
•Three full plant-based meals, freshly prepared from organically grown fruits, vegetables and whole grains. A typical meal will include salad, cooked vegetables, baked potatoes, Hippocrates soup and juice.
•Fresh fruit and vegetables available at all hours for snacking, in addition to the regular diet.

All medications used in connection with the Gerson Therapy are classed as biologicals, materials of organic origin that are supplied in therapeutic amounts.

The supplements used on the Gerson Therapy include:
•Potassium compound
•Lugol’s solution
•Vitamin B-12
•Thyroid hormone
•Pancreatic Enzymes
•..and more