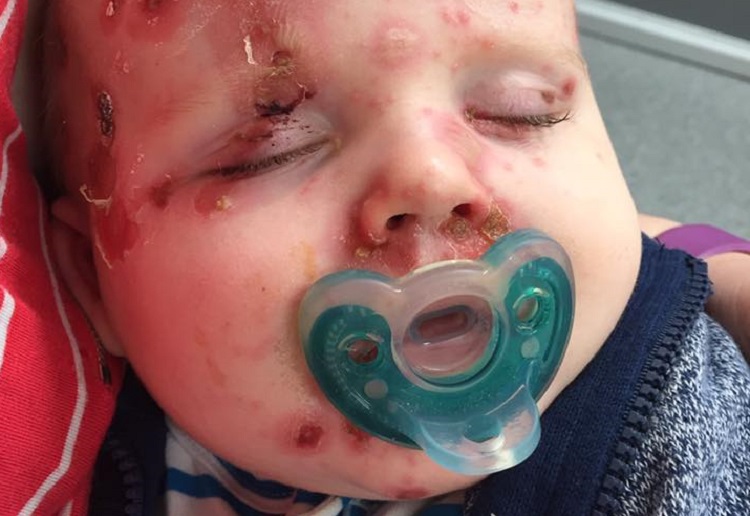 Mum shares these images to remind people why it is SO important to vaccinate and protect those who are too young or unable.

Kayley Burke from Queensland shared this post on Facebook to remind people exactly why you need to vaccinate.

“Vaccinate your kids people… The pictures below show you exactly why… she wrote.

“Bottom line if you don’t vaccinate your kids you’re a bloody idiot… Think about the risk you are putting on other helpless kids that are too young or who actually can’t be vaccinated!”

We recently shared a story from a UK mum who wanted to warn other parents how severe the chicken pox infection can be for some children. Read her story here.

What is Chickenpox – Varicella via RCH Melbourne

Chickenpox is an infection caused by the varicella virus. It cannot be treated with antibiotics. Treatment is usually to relieve the symptoms.

It is easily spread by either having direct contact with (ie touching) the person who has chickenpox, or from fluid droplets in the air when they cough. Fever and a rash are the most common signs of chickenpox. A person with chickenpox is infectious to others from one to two days before the rash first appears until the last blisters have dried up. Children and adults of any age can get chickenpox but it is more common in children.

One in 5,000 people who catch chickenpox will develop a brain inflammation called encephalitis, and three in 100,000 will die. A chickenpox vaccination is recommended for children aged 18 months as part of their normal schedule of vaccinations.

Signs and symptoms
•A mild fever.
•Feeling tired and irritable.
•Itching.
•Rash. The rash usually first appears on the chest, back or face.  It then can move to other areas of the body including inside the mouth. At first, the rash looks like small pimples. These later become blisters full of fluid.