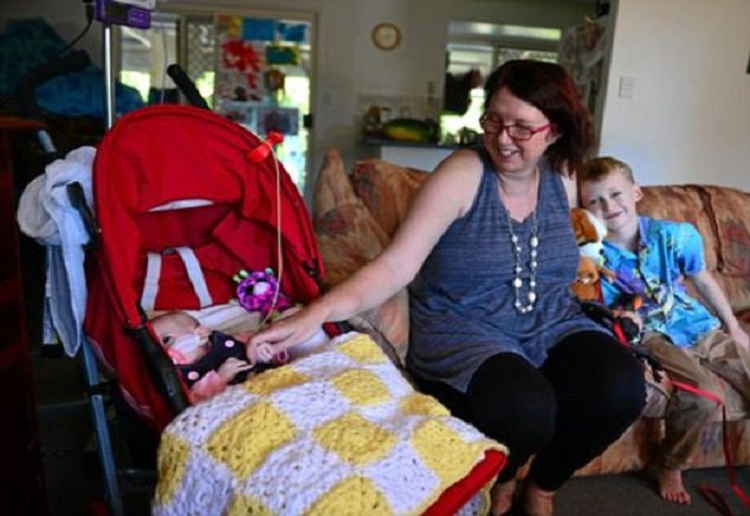 Mum shares guilt at passing on a genetic disorder to her two children.

Whenever Donna Spittles watches her young boy struggling with exhaustion and unable to join in playing with his friends she always feels guilty.

The five-year-old has inherited her medical condition which causes muscle problems and damage to the heart, reports Daily Mail.

Doctors only discovered Donna’s disorder was genetic after her son needed a heart operation when he was just a few months old – identical to the one she had needed as a child.

However Donna, 37, and her husband Aiden, 35, felt that their family was not yet complete and longed for a sibling for David.

Having been told there was a 50:50 chance of their child having the condition, they faced the agonising dilemma… should they give up their dream of expanding their family or risk bringing another child with a devastating disease into this world?

Now that her 10-week-old baby Daisy is fighting for her life in hospital, Donna, from Queensland, Australia, said there are times she now regrets taking that chance.

Just like her mother and brother, Daisy was born with a hole in the heart, known as ventricular septal defect (VSD).

While this a common defect, the cause of it is not – their genetic connective tissue disorder.

Mrs Spittles exclusively told MailOnline: ‘Daisy is being fed by a machine pumping formula into her nasal tube and we can’t even pick her up,’ she said. ‘It’s heartbreaking.’

‘It’s a waiting game now to see if she will put on weight and be strong enough for surgery.

‘I had five years of guilt with David for passing on this condition to him and now with Daisy it’s double fold.’

Little Daisy was born a fighter – she came into the world with the cord wrapped three times around her neck and tore it off, her parents explain. 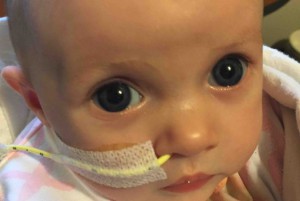 The congenial defect has left her heart pumping so hard she is fighting for every breath.

With her unable to feed and her weight plummeting, doctors are not sure if she will be strong enough for the surgery she urgently needs to stay alive.

‘Daisy seemed fine when she was born and we thought we’d been lucky,’ explains Mrs Spittles.

But three weeks ago she started showing the same worrying symptoms David had and she was rushed to hospital.

Her feeding tube drips in a few millimetres at a time so her heart doesn’t get overwhelmed.

‘This means she can’t be moved… her heart is working so hard it’s causing her to vomit a lot,’ said Mrs Spittles.

‘We really thought she was going to be okay but it turns out her condition is worse than David’s was.’

‘We started our own defect’

Mrs Spittles herself had heart surgery at five months old to close a hole in the heart but only had genetic testing when David was born.

‘They told us they can’t find the gene that’s responsible for this,’ she said.

‘So they believe that we have started our own defect.’ said Donna, We are the only people in the world with this disorder.

And while David pulled through surgery, the condition has left the boy, who is in his first year at school, struggling with fatigue and tasks like holding a pencil.

‘He can’t do things that normal kids do, like play football with his friends.

‘His muscles are too weak and he needs to rest a lot as he gets so exhausted.

‘We’ve been told he shouldn’t do anything too strenuous.’

Mrs Spittle says she herself was forced to give up on her dreams of working in the police force because of her disease, and she hopes for a better life for her children.

‘It’s so difficult because, as it’s so rare, doctors are baffled and can’t say what our future holds.’

The family have set up a GoFundMe page for anyone that can help with their financial burden.

Childhood heart disease is the biggest killer of Australian kids under one.