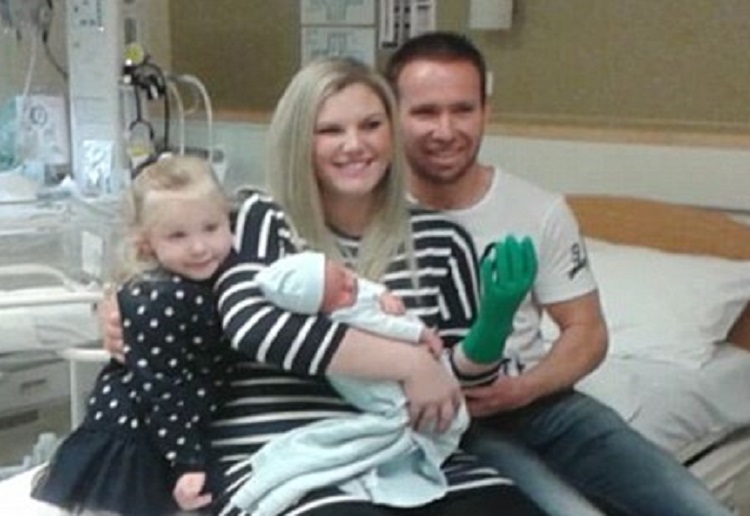 Danielle Daniel shared an incredible video of herself delivering her baby boy during her C-section with the world. Now she wants to spread the word on the procedure that helped prevent her suffering another miscarriage.

The excited mother, from Traralgon in Victoria, was seen reaching over the sheet in the operating room and pulling her baby, Kaleb, from her womb, reports The Daily Mail.

But Mrs Daniel’s reason for doing so goes far beyond scoring viral hits, with the mother-of-two and her husband Justin hoping to shine a light on a rare yet very effective surgery that can help with preventing miscarriages and early labour.

Not long after getting married in 2010, the pair tragically lost their baby boy who was born premature at just 24 weeks.

Mrs Daniel, 31, was later able to successfully give birth to a little girl, Faith, now three, but not without experiencing a stressful pregnancy and later, several miscarriages.

The pair sought the help of Dr Sherif Girgis with their latest pregnancy, who had been trained in a new surgery called a laparoscopic cervical cerclage.

The rare and little known surgery, which involved inserting a stitch into the top of Ms Daniel’s cervix before pregnancy, is known to help prevent miscarriage and early labour due to keeping the cervix closed.

‘We went through that devastating experience early on and knew nothing about premature labour, and after having Faith, our doctor, Doctor Sherif Girgis, told us about this procedure,’ Mr Daniel told Daily Mail Australia.

‘A lot of people don’t know about it and it really helps with stopping early labour and getting past that dangerous zone in the middle of the pregnancy.

‘A lot of the midwives hadn’t heard of it as there is another stitch that is quite common but this one is completely different. And after the successful birth of our baby boy we thought it would be a great opportunity to get the message out about this surgical option.’

Mrs Daniel said the surgery was done via a keyhole a month before she became pregnant and that it took less than a week to recover.

‘I really recommend it because it was a quick recovery and I fell pregnant just one month afterwards,’ she told Daily Mail Australia.

Doctor Sherif Girgis, one of just two doctors trained in the procedure, said it can certainly help with preventing miscarriages that occur due to a weak cervix.

‘The success rate is very high from this procedure and when it is done beforehand it can’t interfere with pregnancy or periods,’ Dr Girgis told Daily Mail Australia.

Due to the procedure preventing Mrs Daniel from giving birth naturally, she was offered the opportunity to deliver her baby during her caesarean.

‘I was nervous about the idea when they mentioned it and we were hesitant at first because we just wanted to leave it to the experts,’ Mrs Daniel said.

‘But during the procedure I decided to go ahead with it and I’m so glad I did it. I was the first person to be able to hold him and I found it really helped with the bonding too, rather than someone else taking him away.’

Dr Girgis said that it was a completely safe thing to do, as long as it was in a controlled environment.

‘This way they have that bonding… but it is important it is carried out in a controlled and sterile environment to avoid the risk of infection.’

Mrs Daniel hopes to raise awareness about the laparoscopic cervical cerclage and credits the procedure to their successful pregnancy.

‘I know a lot of people are interested in the birth itself but this surgery was so safe and effective and we really want to help other women who have struggled to carry and share with them this progressive option,’ he said.
‘It needs to be out there and it’s exciting that we can help spread the word.’