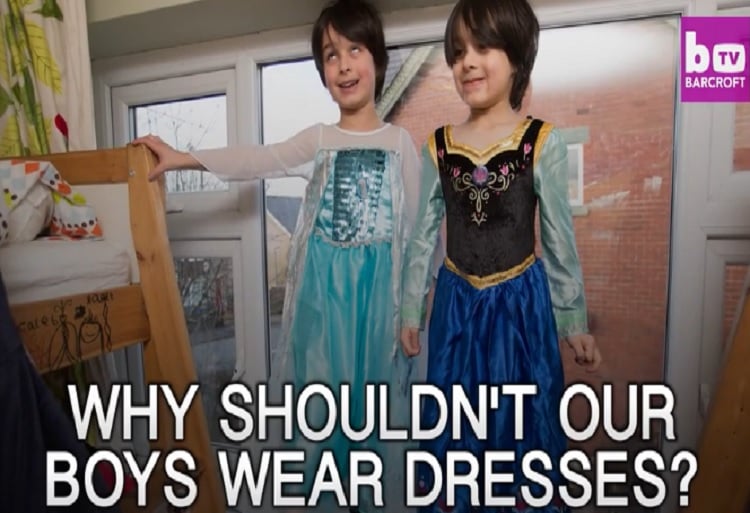 Gabriella Haughton-Malik and husband Joe are happy to let ‘gender neutral’ sons Caleb and Kai dance around the house as Frozen characters Anna and Elsa.

The Mirror reports, the five year old twin boys love charging round the house playing soldiers with their plastic guns, building models with Lego or racing each other with their collection of toy cars.

But they are equally as happy wearing princess dresses, playing with a dolls’ house and having their nails painted, which some might say are activities more usually suited to girls.

Mum Gabriella, a cake designer, says: “We let them choose what they want to do. It’s something we’ve done from day one.”

“… if they were girls and they wanted to play with cars and wear trousers no-one would blink an eye.”

“I want them to feel that they can express themselves and I tell them they look beautiful whether they are wearing trousers or a dress.”

After watching the film Frozen, the boys were taken by the characters and their dazzling dresses.

“We were in the shop getting some school uniforms and they saw these dresses. It was shortly after the film had come out and they were completely obsessed with it.

“They were just going nuts over these dresses so I caved and bought them. Now they spend a lot of time in them.”

Gabriella says: “I don’t think you should put labels on children that are so young. They like being able to explore their feminine diva side, completely immersing themselves in being somebody else. It shows that they have huge imaginations.”

“I think playing with dolls shows that they are caring people and hopefully if they go on and have children they will be caring parents,” she says.

“They are very loving little boys and I think that shows through in the way they care for their dolls and teddy bears.”

We recently shared the story of Shona Campbell who arrived to pick up her three-year-old son from childcare only to over hear a conversation about her toddlers choice of socks.

There was also an awesome story a few months back of the dad who let his son dress up as Elsa. WINNING!

As I have said before -  I am sick of judgey people. I actually took my six year old son, YES SON, with me for my last pedicure. He LOVED it. He happily sat there enjoying a foot soak and massage while I had my toes painted. We got some odd looks. But I am super proud of both of us and highly recommend all mum’s give it a go!