Alex Upton, 26, was woken up by her inconsolable 10-week-old son, Ezra, last week. After spotting his red, swollen toes, she discovered a piece of her hair was restricting circulation to them for around “12 to 14 hours” – leaving him in agony, shared The Sun. 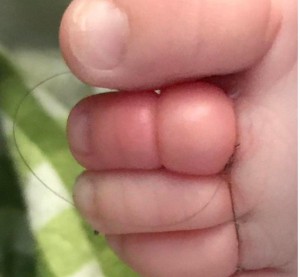 Alex, from Paignton, Devon, said: “I’ll certainly be checking everything for hair from now on. I felt awful.”

She continued: “I just can’t believe midwives or doctors don’t warn you of the risk when you have a baby.

“I feared Ezra might lose some of his toes and he could easily have needed [to have them removed] if I hadn’t noticed the hair then.

“It must have been on there for 12 to 14 hours because I only noticed it in the morning.”

She is urging parents to stay vigilant when bathing or dressing their children.

The ‘safety-conscious’ mum is hoping that by speaking out, she will prevent other babies going through the unnecessary pain Ezra did.

Alex said: “I’m normally really safety conscious with the kids but I had never expected this to happen to us.

“My advice to any parents would be when you’re changing baby-grows or putting on socks, or even getting them out of the bath, check thoroughly and make sure you turn clothing inside out first to remove any stray hair.

“Hair easily gets stuck in things when they’ve been in the washing machine too, so it’s important to check.

A two-month-old baby in China almost had his left thumb amputated after a hair became tightly wrapped around it. Read more on that here.

Last year we shared a similar story from an Australian mum who never would have expected to be in the situation that nearly saw her little girl lose her toes. Read her story here.

Tizzie Hall also had a frightening experience when a hair nearly cost her young baby his toe.

Is a medical condition where a hair or thread becomes tightly tied to a finger, toe or other appendage cutting off circulation and potentially causing amputation.

The problem usually affects young babies when hair ends up in their socks and is most common when mothers are shedding hair post-pregnancy.

Identified with magnification and cut away usually with small scissors, the condition is often missed by some doctors.