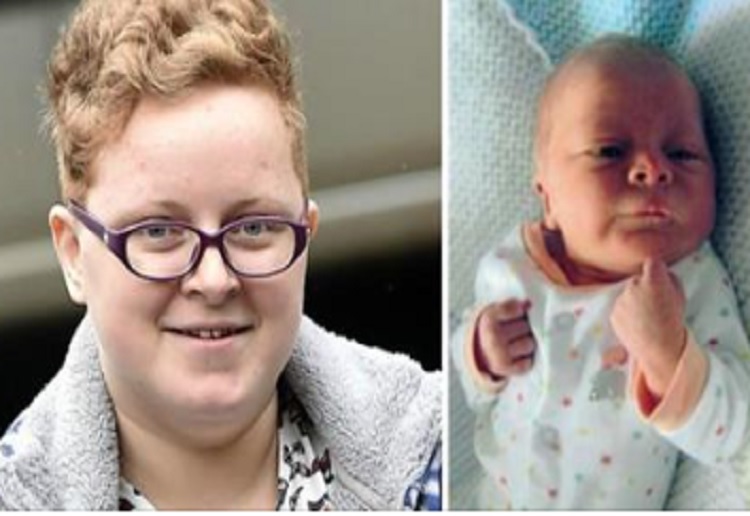 Hannah Turtle, 22, of Shotton, North Wales, told how she heard voices telling her that she was a bad mother and that she did not deserve her baby – before she went on to suffocate him.

In May 2016, she put her hand over nose and mouth and stopped him breathing despite him struggling against her.

She entered the dock at Mold Crown Court and admitted murdering James Hughes in 2016 at the home she then shared with her partner Ian Hughes and his mother Kathleen in Shotton.

She also admitted three charges of causing him unnecessary suffering and two of administering him a poison – her own anti-depressant medication which had been put in his milk bottle.

Infanticide was no longer an issue, but post-natal depression was. While she had no mental illness it was agreed that she suffered from a personality disorder.

She initially denied being responsible but then told a social worker and repeated it to a nurse that she had killed him.

She said she needed help and had heard voices telling her that she did not deserve James. ‘I wish I had never done it. I know I need help,’ she said.

Last year a 24 year old Melbourne mum was sentenced to a 12-month community correction order after earlier pleading guilty to infanticide over the April 2016 death of her daughter Sanaya Sahib. Read more HERE.

The legislation on Infanticide
Section 6 of the Crimes Act 1958 is the relevant legislative provision for Infanticide.

It states:
(1) If a woman carries out conduct that causes the death of her child in circumstances that would constitute murder and, at the time of carrying out the conduct, the balance of her mind was disturbed because of-
(a) her not having fully recovered from the effect of giving birth to that child within the preceding 2 years; or
(b) a disorder consequent on her giving birth to that child within the preceding 2 years-
she is guilty of infanticide, and not of murder, and liable to level 6 imprisonment (5 years maximum).
(2) On an indictment for murder, a woman found not guilty of murder may be found guilty of infanticide.

Readers seeking support and information about suicide prevention or post natal depression can contact Lifeline on 13 11 14 OR Panda..org.au