Article Scary reminder for all parents 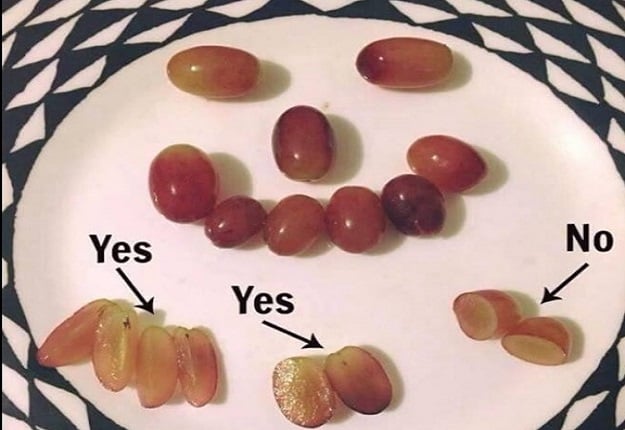 This alarming x-ray shows how important it is for parents to be vigilant about food even as your children get older.

The x-ray image, shared on Australian Facebook page, Finlee and Me, shows a circular object lodged in the lungs of a young child.

It comes with a chilling reminder of just how dangerous seemingly harmless items can really be.

What the x-ray shows is a grape. Yes. A grape. It’s lodged at the top of a five-year-old’s airway and had to be removed under general anaesthetic.

“Do you know what this X-ray is of? A grape!

A grape that was lodged in the top of a five year olds airway. This sweet soul had to be operated on, under general anaesthetic to remove the grape.

He is VERY lucky that part of his airway was open or else this could have ended badly.

So please be mindful that not all kids chew their food, are in a rush at school to get in the playground etc. Please be careful. And when in doubt just cut the damn grapes, baby tomatoes etc.”

The warning has been shared over 12,000 times and received thousands of comments from shocked parents.

A UK Mum has previously warned parents to ALWAYS slice grapes after her two year old son almost choked to death. Her post went viral with over 420,000 shares.

What to do if your child is choking

The below video by St John Ambulance shows you what to do if a child is choking.

Kidsafe recommend “choking on food or a small object may occur at all ages. However, it is a particular problem for young children 0–4 years due to their small breathing tubes (airways) and the fact that they are still developing their teeth and the ability to chew and swallow.

There is conflict between the importance for children to eat raw, natural and often more healthy foods, and their ability to chew these foods properly.

Some useful advice to consider when preparing food for young children is:

If the child IS breathing, coughing or crying, the child may be able to dislodge the food by coughing: