Article Six of the Most Common Types of Skin Rash 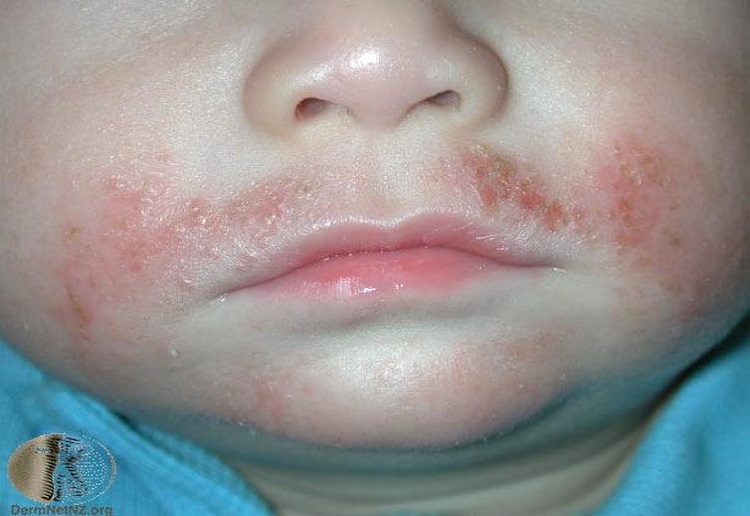 Common skin rashes and what to do about them.What’s that rash? Here’s what to look for to diagnose a common skin complaint.

Everyone has had the unpleasant experience of a rash on the skin – pink, red or purple, flat or bumpy, itchy, scaly, pus-filled, or just plain unsightly. This variety isn’t surprising, because the skin is a complicated organ.

Infections, allergic reactions, immune system problems and even bad reactions to medication can all manifest as a rash.

Here are a few of the most common types.

Almost every prescription medication available can cause a rash as a side effect, and more than 80% of those are “exanthematous drug eruptions”, meaning a widespread rash accompanied by other symptoms such as headache, fever and feeling generally unwell.

This rash usually appears within two weeks of starting a new medication, as a widespread, symmetrical rash with pink-to-red spots that are flat or elevated and firm, and that might join together in patches.

Read more:
Common lumps and bumps on and under the skin: what are they?


This type of rash is a hypersensitivity reaction, in which the attacking soldiers of the immune system (called “T-cells”) detect the drug and try to clear it from the body by releasing inflammatory proteins.

Very rarely, a drug can cause a severe and life-threatening rash called “toxic epidermal necrolysis” where the skin begins to peel off in sheets. It’s more common in Han Chinese people with a specific genetic variant, and requires intensive care or burn unit treatment.

Most drug eruptions go away within a week once the patient stops taking the problem medication, or within several weeks in protracted cases. In the meantime, or if the drug is essential, steroid creams (which reduce inflammation) and emollient (softening) moisturisers can bring some relief.

Allergic contact dermatitis is caused by direct skin contact with a substance to which the person is allergic. The immune system’s T-cells overreact to the allergen and release proteins that call more immune cells to the area, making it red and swollen.

Read more:
Why does Australia have so much skin cancer? (Hint: it’s not because of an ozone hole)


It’s often itchy and can be blistered or dry but bumpy. The reaction is often delayed by 48-72 hours, so it can be difficult to determine exactly what caused the reaction. It should also die down by itself over a few days, as long as the allergen is no longer on the skin.

Contact allergies can develop suddenly after years of exposure to an allergen. Jewellery containing nickel, fragrances in lotions, household cleaners, preservatives in hair products, and latex in gloves or condoms are common sources. A dermatologist can carry out a patch test to determine whether a substance is the allergen, by applying it to a small patch of skin.

Active dermatitis is treated with emollient moisturisers and steroid creams, or with oral steroids or drugs to suppress the immune system if very severe. Further episodes can be prevented by becoming aware of the sources of the allergen, reading labels carefully, and using gloves to handle allergen-containing products.

Atopic dermatitis or atopic eczema (often just called eczema) is very common in children from three months old onwards, but appears in adults too, often with hay fever and asthma.

Atopic dermatitis features patches of intensely itchy red skin, sometimes with blisters and weeping patches. Children often have open sores and scabs, because it’s so itchy that it’s hard to refrain from scratching.

Over time the skin becomes thickened and rough from frequent scratching and rubbing. Childhood atopic dermatitis tends to improve as the child grows up, but may continue. Far less commonly, atopic dermatitis can also appear first in adulthood.

Atopic dermatitis is a disease of the immune system, in which
structural defects in the skin barrier make it easier for irritants to penetrate into the skin. This throws the delicate balance of the microbial community on our skin out of whack, causing the immune system to go into overdrive. Triggers include stress, sweating, coarse fibres in clothing, inhalation of allergens such as pollen, irritants such as soap or perfumes, and eating food we’re allergic to.

For severe cases that don’t respond to these methods, the drug dupilumab has just been approved for use in Australia. This drug blocks a specific cell receptor to prevent immune cells from detecting two overactive inflammatory proteins.

Atopic dermatitis can have a big impact on quality of life, due to insomnia from the constant itchiness, and restrictions on clothing, body products, pets or activities. Its presence on prominent parts of the body like the face and hands can also reduce self-esteem. Evening sedatives to improve sleep and psychotherapy can help reduce the impact on everyday life.

Psoriasis is another chronic immune disorder. It can start at any age and can be lifelong, and is usually present as red plaques (raised or thickened skin) with well-defined edges and silvery-white scales, ranging from a few millimetres to several centimetres across. The overactive inflammation can also damage the joints and lead to psoriatic arthritis.

Read more:
The skin is a very important (and our largest) organ: what does it do?


Often the plaques feel itchy or sore, and because psoriasis is long-lasting and can appear prominently on highly visible parts of the body, it often comes with severe psychological effects.

Psoriasis is caused by too many new skin cells being produced and moving up to the surface of the skin too quickly. It’s not known exactly why, but there’s usually an overabundance of inflammatory messenger proteins in the skin.

It can be triggered or aggravated by a streptococcal infection such as tonsillitis, smoking, hormonal changes such as menopause, and some medications. Genetics play an important role in susceptibility to psoriasis and also in what treatments are effective.

Chronic plaque psoriasis, the most common form, can be very resistant to treatment. Small areas can be treated with creams containing steroids, coal tar, or vitamin D. If a lot of the body is covered by plaques, oral immunosuppressant drugs are used, or phototherapy, which uses targeted UV light to destroy over-active immune cells. Moderate sun exposure sometimes improves psoriasis, but sunburn can worsen it – a tricky balance in Australia’s high-UV environment.

These treatments can usually improve the plaques, but it can be very difficult to clear it completely. There are several new drugs coming onto the market for severe psoriasis that hasn’t responded to other treatment.

Tinea, or ringworm, is not caused by worms at all but a fungal infection. Tinea is usually named according to the body site it’s on, but the same few kinds of fungus can cause tinea in many parts of the body and it can be spread from one part of the body to another, such as by scratching or using a contaminated towel.

Tinea pedis, on the foot, is an important type because spores can live for weeks in communal showers and changing rooms, making it a common source of infection that can then spread to the trunk, arms and legs (tinea corporis) or groin (tinea cruris, or jock itch). Cats, dogs and other animals are a common source of ringworm fungus, but many types can be spread between people too.

Typically, tinea spreads in a circular or oval patch, often healing in the middle so that it appears to be a red scaly ring of infection. Sometimes it can also become a fungal abscess that looks like a boil, feels boggy, and has pustules.

On the feet it can look like ringworm circles, patchy fine dry scales on the sole, blisters on the instep or a moist, red peeling area between the toes (athlete’s foot).

In the groin, it can have a scaly, red raised border and be extremely itchy.

Tinea is diagnosed by microscopic examination and laboratory culture of skin scrapings. It’s usually treated with antifungal creams, or oral antifungal drugs if it persists. It can become chronic in the warm, moist folds of the body.

Shingles is a famously painful, blistering rash caused by the reactivation of chicken pox virus, varicella-zoster virus, usually years or decades after the original infection.

The virus lies dormant in nerves near the spine and migrates down the sensory nerve to the skin when it is reactivated, but it’s not known why the virus is reactivated. Some possible triggers are radiotherapy, spinal surgery, other infections, or cancers.

Shingles starts with pain in the skin that is often described as burning or stabbing, followed in one to three days by a rash of raised red bumps that become blisters and then crust over. The rash is usually confined to a narrow arc of skin, along the sensory nerve that was harbouring the virus.

Patients often have a fever, headache and swollen lymph nodes. Recovery takes two to four weeks but the pain can persist after the rash has healed, called post-herpetic neuralgia.

If it’s caught within three days of onset, antiviral medication can reduce the severity of symptoms and length of the infection. Otherwise, treatment consists of powders or solutions to dry out the rash, as well as pain relief and rest.

Australians aged over 70 are eligible for a free zoster vaccine, which reduces the risk of shingles by half.