Article Vomit is not romantic! 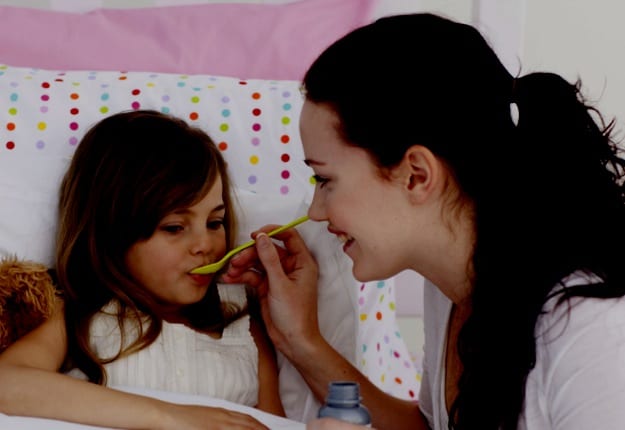 As I type there are 3 children on my couch.  Each is freshly showered in freshly washed pyjamas.  And amazingly they are all watching the same TV show without fighting.

Sounds like a Hallmark moment doesn’t it?  And I should be leaning against the kitchen bench with a steaming cup of tea in hand, smiling down at my little row of poppets. Yeah right.

Upon further analysis, the lack of bickering and niggling today is due to a distinct lack of energy because in addition to the fresh pjs, they also each have a towel on their lap and a big plastic bowl.  No, they are not shelling peas.  They each have their own ‘vomit bowl’ (so dubbed by my kids)!

Yes, the vomit bug has hit our house big time and it’s well and truly doing the rounds.  Usually one escapes but alas, not this time. I have been up to my armpits in vomit for the past 4 days.

Before I had children, as much as I didn’t want my children to ever fall ill necessarily, I always had romantic notions of me tending my children who were a little off colour.  You know – me dispensing love and kids paracetamol and them lying quietly on the couch and gently smiling up at me through slightly watery but ever so loving eyes.

Fast forward to the time when our children are genuinely eating solid food and are mobile enough to NOT stay where we put them, and sickness (particularly the vomiting kind) takes on a new dimension.

You know the story.  Middle of the night stripping of beds, hosing down (eeuw) of sheets, doona covers, teddies and blankets and wondering how on earth one little person can possibly get that much stuff that far across the room!

The moment of discovery is always challenging – you kind of don’t know quite what to do first. All your child wants is for you to gather them up and comfort them but the thought of them covered from head to toe in (did they really eat that anytime in the last week) coming anywhere near your clean self is a little challenging – even as their mummy.

Occasionally they’ll make it a bit easier.  Making it to the bathroom floor is 1000% better than in bed and 500% better than on the new carpet.  The only thing worse than all of that is when they asked for a cuddle in your bed and then you realise that they needed that cuddle because they were about to throw up.

Personally, I’m not one to commence dry reaching whilst trying to deal with the aftermath of one of my kids’ vomits. But I never fail to be drawn to the point of belly laughing to watch my other half writhe and squirm at the thought of having to deal with anything vomit related.  If I would allow it, he would simply dump everything in sight into a garbage bag and rush with it to the bins by the garage (probably including the child).

Luckily for him, he was out the night the most recent bug arrived. All the kids were asleep so I thought I’d have 5 minutes to stand under a hot shower zombie-like – recovering from a busy day. Two minutes in I heard a weird bang.  I immediately discounted it being any of my kids because they would simply open the door and walk in.  To be honest, I kind of panicked.  So, nude and dripping wet (why I didn’t grab a towel is anyone’s guess), I poked my head out the door into the darkness of our bedroom.

Standing there, with watery eyes and her breath catching every time she inhaled, was my little 4 year old poppet.  Because it was dark, I couldn’t see her clearly so asked why she didn’t just open the door.  She held up two tiny little hands, burst out crying and flung herself against me.  I realized all too late that she was COVERED in vomit … and now so was I!  So, nothing to do but waddle back to the shower with her attached to me to commence hose down. We showered for quite a time, her relaxing under the warm water as I soaped and scrubbed – her, me and her clothes!

If you’re a mum, you’ll know how I spent the next hour or so.  You’ll also know what’s been going on between then and now.  You’ll know that the washing machine has run 24/7 and that my dryer is now my new best friend. You’ll also know how happy I will be when we’re all eating again … and everyone is keeping everything down.

Come on mums, time to share – what’s your worst vomit story? Was there one that makes you laugh to remember or does just the thought of it have you reaching for the dry biscuits and electrolytes!