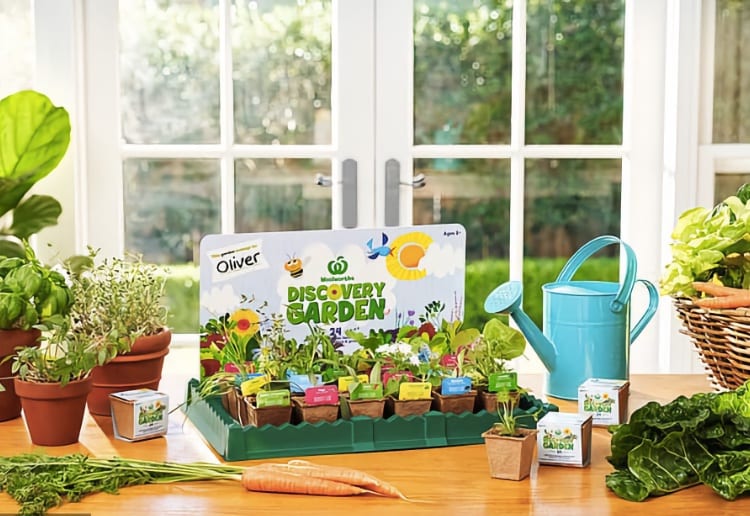 Woolworths Discovery Garden is back this week! It’s a new eco-friendly mini-collectable campaign for those families with green fingers. But before you get all gloved up and ready to dig, there’s a warning to keep in mind.

The supermarket giant has released the identity of the 24 different seedlings that will be on offer. The list includes mainly herbs and veggies with a few colourful flowers thrown in for some brightness.

From Wednesday 10 February, shoppers can earn a free seedling kit with every $30 spent in-store or online in a single transaction.

The seed packs on offer are: 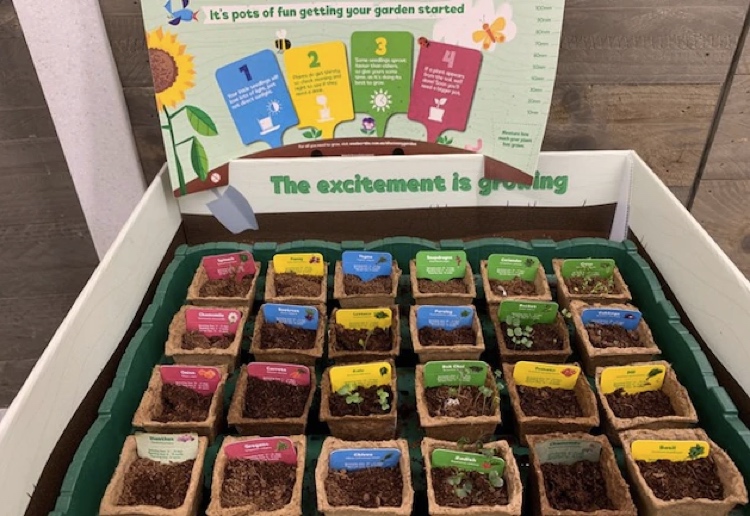 It’s All About The Bees

Woolworths has pointed out that 21 of the seedlings are bee attracting so are hoping that this year’s Discovery Garden collection will encourage Aussies to think about the roles that bees play in pollination and helping the continuation of our food supply.

What’s In The Kit?

Each seedling collectable kit comes with an cardboard info sleeve and label ; a seed mat made from dissolvable paper ; a wood pulp pot, the actual seeds and the ‘soil’ pellet made from coconut husk.

But the collection is not all honey, bees and roses. A warning circulated during the last Woolworths Discovery Campaign which we thought should be resurfaced.

A mum voiced her concerns after receiving her first seedling collectable as part of the supermarket’s initiative to get kids planting.

She posted a question on the Mouths of Mums MoM.Answers platform:

“Possible danger of toddler swallowing the circle of soil?
Each Discovery Garden collectable comes with a circle of soil. You add water and it swells up and then the soil is to be added to the pot provided. What if a young sibling thought it was a lolly and swallowed it? I’d hate to think what may happen? Anyone have any idea?”

Her question was posted on facebook and the question received over 800 comments – but unfortunately most of them viciously tore the poor woman down for even daring to voice her thoughts.

Very few of the commenters actually addressed her concerns at all – most mainly focussed on belittling her and making her feel ridiculous for expressing these worries.

But we do think her concerns are actually valid – especially if you have babies or toddlers at home.

Most of the comments called on the mum to make sure that she was supervising when the soil pellets were in reach of little ones.

“Common sense would be ummm to supervise . Like really it doesn’t need a manual to imprint ‘ common sense’

“If a kid can swallow this whole and not choke, they need a medal. And good luck chewing enough off to cause any issues. They’re quite hard!”

“It’s actually so big I don’t think it can just be swallowed. Once they take a bite I’m sure they will taste that it’s not candy.. on another note, don’t leave it somewhere your kid can get to it and maybe look after your kid?”

It Happened To Me!

However, one mum confirmed the poster’s worst fears sharing:

“My 2yr old opened one today took it to his dad and said ooh yum loll loll. Lucky my hubby took it from him and said no.”

“My 13yr old thought they were cookies sitting on the table. I sat silently waiting to see if she would eat it – she didn’t and before anyone has a hissy fit I would have stopped her before it got to her mouth.”

And others were just plain rude:

“Oh for god’s sake! That’s why kids have parents! To do these activities with them! Stoopid cow!”

Amazingly, there were a handful of useful suggestions:

“I did worry about this too but I’ve set up a spot for my boys out of her reach and told them that it’s dangerous for her (I was worried mostly about choking), I can’t have my eyes on her every second and accidents happen but if everyone is aware it can be avoided”

“I mean if it swells inside a child then it’s only going to go straight through them… it doesn’t stay solid. It’s soil. Admittedly you wouldn’t want anyone to swallow it but on the odd cases someone is silly enough to let a young child get their hands on it unattended enough to eat it, I doubt it’s cause any real issues.”

“If your kid eats it, it will swell up to like the equivalent of a mouthful of dirt and their immune system will get a boost just like any kid who has ever eaten dirt.”

“First explain to them, it’s not a lolly, second, wouldn’t you be watching/helping them with it anyway and three, it’s rare that a little bit of dirt is going to be a danger to a child…and four, if you don’t like it, don’t accept it if you shop at Woolies!!!”

“I think if they ate it they will have a full tummy for a while and Poo peat moss. I however doubt the child would eat the whole thing. Younger kids are quick and can get into anything if they want too, supervisions or not they are good, it only takes a second.
Nasty comments to this lady with a legit concern is not on.”

And we couldn’t help giggling about some answers:

“Just check the kid in a few weeks for a carrot.”

“Look on the bright side, you wouldn’t need to give the turdler lunch that day. I’m sure there’s more nutrients in that soil disk than chicken nuggets.”

“If they eat the soil pod administer the seeds immediately. Give a glass of water, and plant them in the garden.”

Whatever your response is, it’s a pity that this mum was taken down for expressing a genuine worry. Definitely something to keep in mind as you start building your collection this time ’round.

Are you planning on taking part in the new Woolworths Discovery Garden? Tell us in the comments below.