Article “What was she doing having sex after six weeks!?” 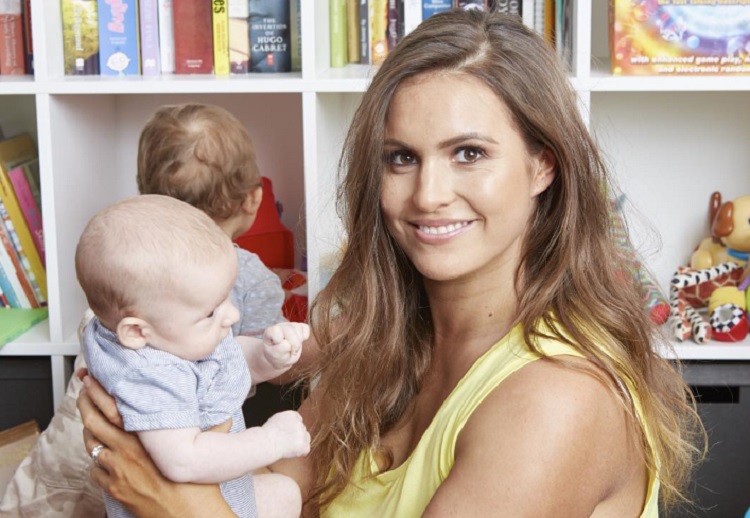 Former Home and Away actress Christie Hayes has opened up about her ‘surprise’ second pregnancy.

Christie wrote a candid blog post on The Modern Mumma, sharing the shocking moment she discovered she was pregnant again, and the ‘confusion and embarrassment’ that can come with explaining the age difference between her sons.

“What’s the age difference between the two?” “11 months” I reply.

To save time, confusion and embarrassment, (usually because this happens somewhere awkward like the tampon aisle) I offer up the answer for them.

“I was pregnant 6 weeks after I gave birth to my first.”

Motherhood was something I always wanted, but I wouldn’t say I was a natural born mother. My older sister gracefully wears that title. I’m a career person. Let me clarify, I don’t believe you HAVE to be one or the other. I do believe you can “have it all”.

My first baby was planned, my second was a surprise. A BIG surprise. One I have been congratulated on, one I have copped flak for, and one that has resulted in the now cringe-worthy experience of people publicly discussing my sex life.

“What was she doing having sex after six weeks!?” “How can she be so stupid? You’re most fertile then!”

You get my drift. I am a big believer in creating your own destiny, manifesting your dreams and getting what you focus on. However, throw in divine intervention, some luck and in this case, simply a natural course of events after some time in the sack. Bam! Pregnant.

Here I was. I’d just given birth, was so tired I couldn’t remember my own name and frankly, slightly depressed at a time I should’ve been happy (according to all my well-wishers who were kindly telling me this was going to be the happiest time of my life). And pregnant. AGAIN.

The HAPPIEST time of my life? It can’t be. I’m not sleeping. I don’t know what I’m doing. I love and adore my beautiful boy, but I can’t really boast great skill about how to look after him properly. Hell, at times I can’t really even look after myself. THIS is the happiest time? Does it get easier? Will I get used to bringing a baby with me, packing his pram, grabbing nappies and a few bottles every time I go out, even if it’s just to go to the shops?

I remember the doctor telling me the test I just took was positive, that I was “about 6 weeks along”. I remember feeling guilty straight away because I didn’t jump for joy. I felt shocked, a little scared and justifiably, very tired. A completely different reaction to my first pregnancy where we both cried, laughed, jumped around like idiots in the doctor’s office then straight away went and cleared out our local pharmacy with vitamins for me.

A phone call to my darling fiancée Daniel offered great relief when he told me it was beautiful news. He told me I didn’t need to worry, (I’m always a worrier – “are you having fun? Are you bored? Do you need another drink? Is this table okay?”) reassuring me we could do it, I could do it, and most importantly, how blessed we were. Couples and single parents try for years to fall pregnant and have a family. I truly understand how lucky I am. I guess selfishly, I just didn’t feel it at the time.

The journey of the first trimester started, along with caring for a 3 month old baby. Then the great stuff happened. Hendrix slept through the night, every night. I got into a rhythm. My partner and I got into a rhythm of parenting together. I’d like to stress that I loved and appreciated many moments in his early childhood, like the smiles, laughs, cute first time things. Yet if I’m being honest, it was different to how I expected it all to be. It was real. It was work. It was tiring. It wasn’t like I imagined. It was the good, the bad and the ugly of being a first time mother.

Flash forward to September 4th, 2015, and my beautiful second son, Harley was born. Exactly 11 months to the day his big brother was – in the exact same hospital room. And whilst it has had challenges, it’s wonderful. He is wonderful. Motherhood is wonderful. Hell, motherhood to two kids under 1 is wonderful.

I’m never going to be the mummy who sends her kid to school with the best tasting birthday cake (I can’t cook, it’s just not my thing and most nights I’m mercifully asked to leave the kitchen), nor will I volunteer at the school canteen (please see earlier point regarding cooking). But you know what? That’s okay too.

A year and a half after my darling son Hendrix was born, and almost 6 months after Harley, I am delighted to say that having our two children is by far the best thing I’ve ever done. You do have a lot less time for yourself once you are a parent but it’s important to note that it does become easier!

I am a confident mother. I offer good advice when I am asked and whilst depression crept up on me and hit me like a ton of bricks in the early days, it is now a thing of the past. Like my fabulous Calvin Klein handbag.

During the times you’re doubting yourself, do what I do. Let the words of the late, great Yul Brenner in one of the 90s finest films wash over you.

Look in the mirror and repeat:
“I see PRIDE.
I see POWER.
I see a bad ass Mother, who don’t take no crap off nobody!” I’ll see you in Aisle 5.”

Full story on The Modern Mumma