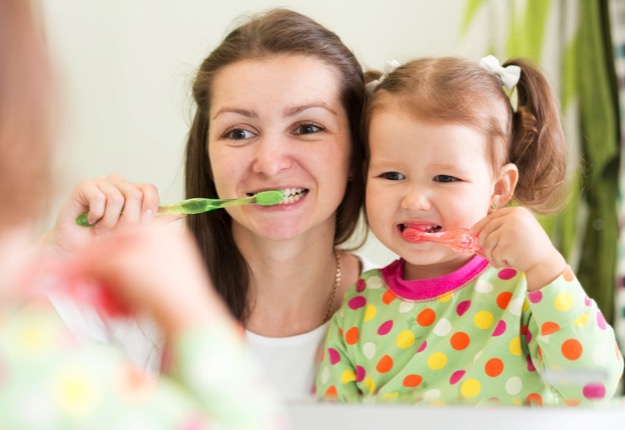 Dental report card fail: half of adults and one-third of kids don’t brush twice a day.

More than one-third of five- and six-year-olds have decay in their ‘baby’ teeth.

But our new report, Australia’s Oral Health Tracker, shows the nation’s oral health is lagging. One in four Australians have untreated tooth decay.

Almost half of Australian adults and one-third of children don’t brush their teeth twice a day. But even those who regularly brush their teeth typically only brush for 45 seconds, which isn’t long enough to remove the build up of plaque.

This is a problem because poor dental health is closely associated with poor health elsewhere in the body.

Tooth decay is the most common chronic health condition in the country. More than one-quarter of tooth decay in Australia is untreated, causing pain and discomfort. It sometimes leads to more complex dental work, including the dreaded root canal therapy.

One in six Australian adults are missing more than ten teeth, making it harder for them to chew food and get adequate nutrition.

Gum disease affects one in five adults. This results in pockets between the gum and the teeth, and can cause inflammation and tooth loss.

The situation for children isn’t any better. Around three-quarters of children exceed the recommended sugar intake, which contributes to tooth decay. More than one-third of five- and six-year-olds have decay in their primary (baby) teeth.

Read more:
Child tooth decay is on the rise, but few are brushing their teeth enough or seeing the dentist

About half of all Australian adults and a quarter of children have not had a dental checkup in the last twelve months.

What can you do?

Quitting tobacco and cutting down on alcohol is important, as these introduce cancer-forming substances (carcinogens) into the mouth. More than 400 Australians die each year from oral cancers and many more undergo surgery, radiation or chemotherapy.

Good tooth-brushing practice will help prevent decay and gum disease. Use a soft brush, twice a day and brush for two minutes or more with fluoridated toothpaste.


Regular visits to the dentist – which are generally recommended annually – allow for preventive care such as a scale and clean, and checking for cavities. Regular visits also ensure that any problems are treated early, before they become major issues.

The cost of dental care is a significant barrier for many in the community.

Australians paid more than A$9.9 billion for dental care in 2015-16, with just over A$2 billion funded by governments (including the private health insurance rebate).

More than two million people delayed seeing or did not see a dentist due to cost last financial year.

Read more:
Health Check: why do my gums bleed and should I be worried?

Governments can do more to help the most vulnerable in the community access oral health care. Just 2.1% of government health spending is currently dedicated to dental health.

Each state and territory has a public dental scheme. But in 2015-16 more than 560,000 people – predominately low-income Australians – were placed on a public dentistry waiting list.

People with fair or poor health were more than four times as likely to be placed on a public dentistry waiting list as people with good or better health.

The 40% of Australians with the lowest incomes also have the poorest health. The failings in oral health care are further contributing to poorer health and lost economic opportunity.

We can lift our game on cleaning our teeth and cutting down on sugar, but to improve Australians’ dental health across the board, we need to make our dental health care system more equitable and to recognise the links between the health of our mouth and that of the rest of our body.