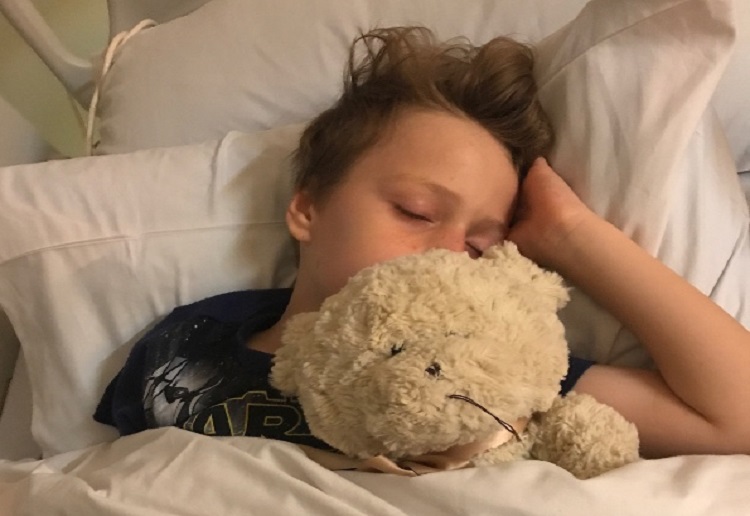 A YOUNG boy has been left with permanent deafness after suffering complications from the flu.

Kynan, 7, from Glenore Grove in the Lockyer Valley, has been in Brisbane’s Lady Cilento Children’s Hospital for about three weeks after being struck down with influenza A.

He suffered a string of other illnesses including sepsis, meningitis, sinusitis and a blood clot on his brain.

Mum, Michelle Meara-Fletcher, said that at the height of his illness, her son spent at least four days in intensive care, but was recovering well now.

Kynan underwent surgery for cochlear implants because the meningitis has rendered the seven-year-old permanently deaf.

Mrs Meara-Fletcher said the family-of-five were saddened Kynan had lost his hearing, but were grateful he was now recovering well.

“All I could think of was, he is not going to hear me say, ‘I love you’ because we are a very kissy, cuddly, affectionate family,” she said.

In a similar case QLD Parents are determined to raise more awareness for sepsis after their teenage son sadly died three weeks after he suffered flu like symptoms.

In another case a young mum is fighting for life in an induced coma, after contracting the flu while pregnant. She has no idea her baby boy has been born

Authorities are now urging those who haven’t had a flu shot to get one, even though it is late in the season. And they advise people to be vigilant about washing their hands, to avoid spreading the virus.

Find out how you can support the family here.

Call a doctor right away if a child develops the following symptoms:
trouble breathing
irritability
extreme fatigue
refusing to eat or drink
trouble waking up or interacting

Read more:
TRAGIC NEWS Young dad dies on his first Father’s Day
Parents beg people to know the signs of sepsis after their sons death
Australia hit by major national flu outbreak
Do I have cold or flu symptoms?
Family of young girl who sadly died of the flu urges people to vaccinate