Article Are You Going To Brave The Aldi Snow Sale? 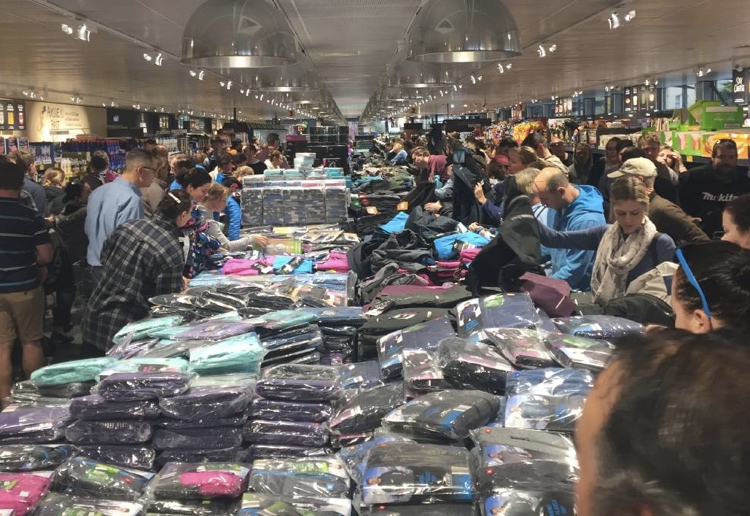 How desperately do you want cheap snow gear? I reckon you’ll need to REALLY need bargain alpine gear to face the crowds and the crush that is inevitable on Aldi’s Snow Sale day.

This year, the sale day is on this Saturday 18 May, and while it’s also election day and Eurovision finals, we reckon Aldi will be jam-packed with bargain hunters.

Last year, many customers stormed onto social media to express their dismay at the chaos and frenzy that the snow sale brings.

Emily Wood told news.com.au that when she arrived at the Aldi store in Maroochydore in Queensland at 7.45am, the line had already filled the car park.

“We sat in the car for a while debating whether we should even bother trying and decided we may as well. We saw lots of kids and mothers with trolleys looking ready to fight it out to the death.

“I started to notice a lot of trolleys being filled to the brim with things and I saw people going through their trolleys, trying things on and dumping stuff they didn’t want.

“They had clearly gone in with a trolley, scooped up an armful of the same thing and hoped that their size was there. I found this a tad unfair for people that were really trying to find their size but these other people had dumped their unwanted clothes in different aisles.”

Glenn Cullen, Ski and snowboard industry expert, wrote on his The Snow Gauge that the sale is a “sh*t show”.

“I’m calling for an end to (the Aldi snow sale) in its current set-up and here’s why,” he said.

“Not because Aldi gear isn’t at least passably good … to me it still seems like a great entry point for the casual to semi-regular snow enthusiast. And if it gets more people skiing or snowboarding — great.

“No, the problem I have with the Aldi sale is the feeding frenzy concept that it very deliberately creates. I do geddit, you know. It’s economics 101. Create a limited supply and then, if your product and the word of mouth is good, develop extraordinary demand. Aldi do it and do it well.

“In the early 2000s you had the major brands and the major stores with their major prices. The casual enthusiast either had to hire or shell out the big bucks. Sure, you might be able to get a cheap winter parka at Kmart — but what about some proper ski pants, a helmet and a dozen other ski-specific things you might need?

“Aldi filled that void and kudos to them. But I reckon it has now turned into a bit of a sh*t show and an unnecessary one at that.”

Looking at the Aldi Snow sale catalogue, there’s no wonder that shoppers get excited.

Premium ski jackets will cost only $120, and windbreakers are priced at $60.

There are bargain prices on Merino and fleece jumpers, and there will be heaps of safety gear and accessories that all come in under $50.

Are you going to brave the Aldi snow sale? Tell us in the comments below.