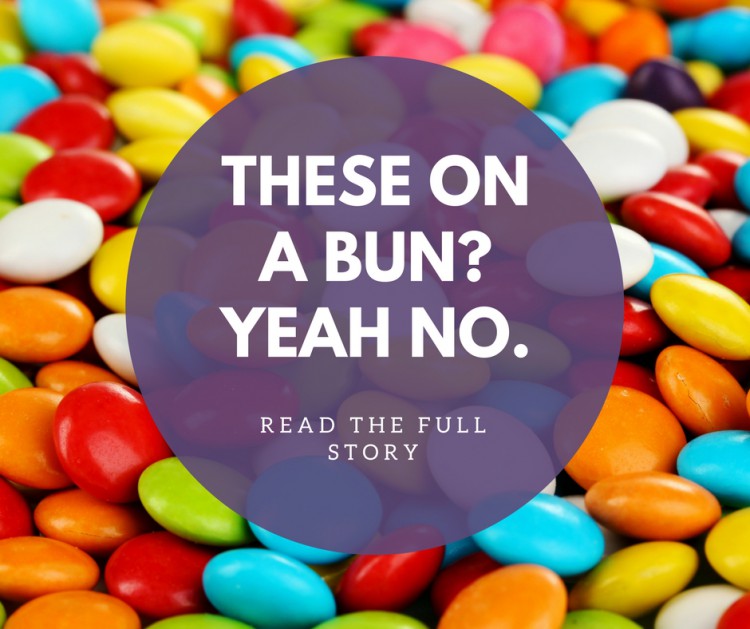 Bakers Delight under fire for an advert promoting finger buns with lollies for school lunches.

The ad showed finger buns with lollies on top and scrolls with Vegemite inside with the wording: ‘School lunches? Problem solved.’

But a complaint to the Advertising Standards Bureau slammed the ad claiming food choices are hard enough, let alone the promotion of lollies on bread for lunch. 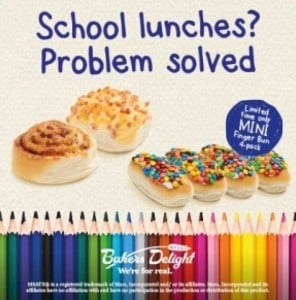 ‘Advertising of lollies on bread for school lunches is appalling. Lunch and healthy food choices is challenging enough for most families and to have this as an acceptable choice is unfathomable,’ the complainant read.

‘Bakers Delight is specifically targeting children to include M&M finger buns as a day-to-day lunch box item. Such products, should rarely (or preferably never) be eaten by children, let alone promoted and ‘normalised’ as an everyday food …’

Bakers Delight said the ad was not specifically directed at children, but rather busy parents looking for an alternative food for their kids.

‘It is not our intention to target children with any of these advertisements, alternatively our copy is specifically designed to be directed at parents,’ its response read.

”School lunches? Problem solved’ is intended to target busy parents during the back to school rush period, to encourage them to consider Bakers Delight in their purchasing decisions. There is no copy used that is targeted specifically to children.

The Advertising Standards Board decided the Children’s Code to advertising did not apply to the advertisement because the content was equally appealing to parents, despite the particular images appealing to children.

‘The Board considered that the advertisement does undermine the promotion of healthy balanced diets through the combination of images and text and that it did breach Section 2.2 of the AANA Food Code.’

Bakers Delight accepted the findings of the consumer watchdog and said they would not be ‘undertaking that campaign as a result of your intervention.’

The company said regardless of the outcome, Bakers Delights’ high-standards meant it would not repeat the campaign because the ad came to the attention of the board.

Do you think this sends a good message to retailers to reconsider their campaigns aimed at our children?  What other changes would you like to see made?