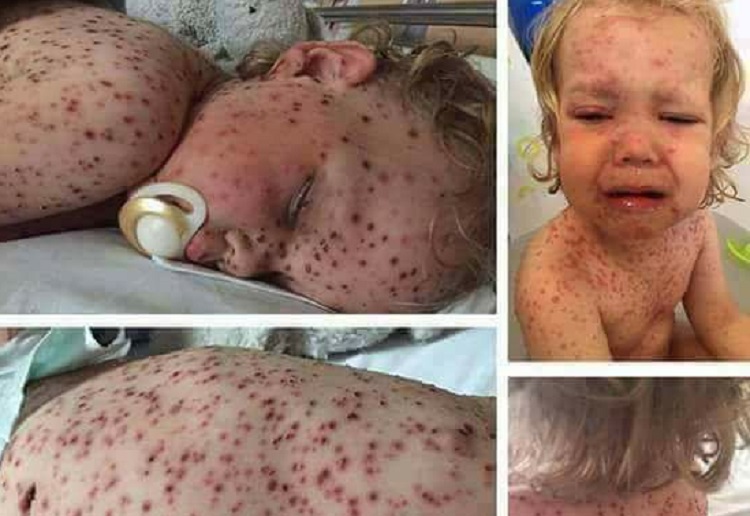 A UK mum claims Facebook scammers are using pictures of her son’s chickenpox, pretending he has cancer.

Jasper Allen, 3, hit the headlines last summer when he was hospitalised for five days with the worst chickenpox doctors had ever seen after being turned away by a GP’s receptionist.

But his mum Sarah Allen, 36, from the UK, claims shocking photos of Jasper’s infected chickenpox sores have been stolen by social media scammers and have racked up millions of shares alongside claims he has cancer and needs money for surgery, reports The Mirror.

Sarah alleges she has reported the photos to Facebook 30 times since she spotted them earlier this month — but said they have not been taken down.

The mum-of-two said: “I first saw and reported the pictures two or three weeks ago.

“The photos of Jasper are on Google, but that’s not the point. It’s not the fact they stole the pictures, it’s the fact they’re lying — cancer is not something you should joke about.

“I have had friends and family call up thinking Jasper actually has cancer. It is really upsetting and distressing. I’ve even seen people commenting on the post offering to transfer donations.

“I think it is disgusting. They are scammers. They can’t be real human beings, because no person would think this is OK. They are making up lies.

“I commented on the post and said ‘you sick b*****d, this is my son, he does not have cancer, take these pictures down’ and the page liked my comment.

“What Jasper went through was awful but it was nothing compared to cancer — that’s why you shouldn’t just throw something like that around. It is not a joke.

“Facebook can achieve amazing things, but sometimes it fails you.”

She has reported the pictures to Facebook about 30 times for copyright breach, child nudity and inappropriate content and received a response from the social media giant stating one of the profiles had been taken down.

Sarah said: “Seeing those photos keep coming up on Facebook is hard — it was a horrible time. And it isn’t just Jasper — they are doing this to people all the time.

“Everyone is commenting on the posts saying it is not cancer, it is a little boy with chickenpox.

“I have had so many people message me about it and I keep reporting it constantly, lots of my friends have reported it too.

Last week we shared the story from another mum who was outraged after Facebook trolls stole a picture of her disabled son to use for their own advantage.

Colette Flanagan’s son, Daire, seven, was born with Apert syndrome, a severe condition affecting the shape of his face and head that has nearly killed him on several occasions.

Sick trolls have attempted to prey on the public’s good nature by stealing photos of Daire and using them to generate a large following, reports The Mirror.

One Facebook post with a picture of Daire said: “Today is his first day at school and he was told that no-one would give him a ‘like’ because of his illness.” 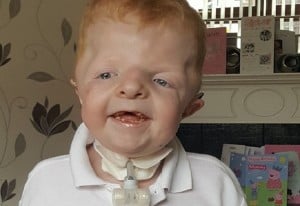 Followers are then urged to write “amen” under the post in a bid to trick unwitting members of the public into believing the lie.

Colette, 38, told Belfast Live : “It makes me really angry to be honest. I’m his mother – I’m supposed to protect him.

“These are horrible, ignorant people and it has really upset me.

“I would not have been held responsible for my actions if they had been there in front of me.”

Brave Daire has undergone dozens of operations to improve his quality of life.

Colette said that she has informed the police, Facebook and the NSPCC of the issue.

She said that attempts from her and family members to get the trolls to delete the posts were futile.

She went on: “I’ve seen a lot of these things on Facebook with regards to these ‘like’ and ‘amen’ posts.

“These are all of real people. Hopefully there is something that can be done. I didn’t put it out there for this kind of thing.

“People are interested in Daire because of what he has been through and how he has progressed.

“He has nearly lost his life a few times and this is just sickening.”

Is the process Facebook spammers use to accumulate as many followers (reach) on Facebook as possible using manipulation, exploitation and deception. This reach can then subsequently be used by the spammers to make money or launch online scams. Often like-farming is used by those craving the social media limelight with no real “end game”.

The processes like-farmers use to accumulate these followers can vary depending on what version of it you come across. Most popularly, like-farmers will create Facebook pages that will consistently publish exploitative or deceptive posts designed to go viral by encouraging Facebook users to engage with (e.g. like, share, comment on) them.

The claim that Facebook (or anyone) will donate money to help a sick child based on how many likes or shares a Facebook post gets is as deceitful as it is illogical. Again these schemes use photos without permission. No one donates money to anyone based on likes or shares.

Please be aware of what you are commenting on and liking on Facebook. It is often best to just report the image. 99.9% of the time it will be a scam.

Carly Findlay, writer, speaker and appearance activist. Carly often challenges people’s thinking about what it’s like to have a visibly different appearance.

She wrote a blog on the topic and wants people to be know that, “To pray for a disabled person is kind, sure. But it doesn’t help. It perpetuates the idea that we need saving and are suffering. Many of us lead fulfilling, happy and successful lives. And prayers don’t address actual disability issues.”

Carly adds, “Please, I urge you to stop mindlessly typing amen and do something constructive to help disability. Don’t feel guilty because a Facebook user tells you you’re heartless for ignoring the posts. Ignore them. And I urge Facebook to review its community standards. It’s certainly not an inclusive, compassionate and honest community when people are exploiting disabled kids for likes.”

Have you been caught?