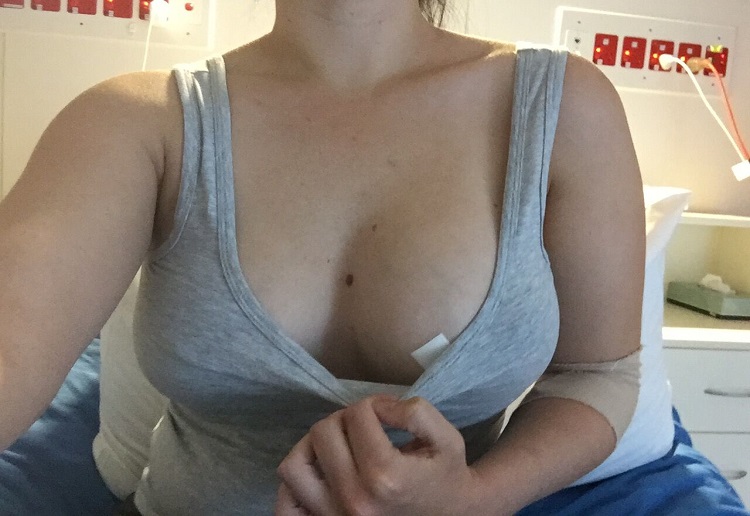 In a world of increasing cosmetic surgery rates, it’s sad to think that we are getting more and more insecure of ourselves. Especially of our bodies.

I got caught up in being insecure of my small breasts at a very young age. At 19 years old I was so excited to make the decision to have a breast augmentation. I was working in the modelling and promotions industry where having big boobs and a tiny waist was a surefire way to get more work. I needed to look good in a bikini and my appearance needed to appeal to Men. That sounds disgusting in my 28-year- old mind, but in my 19-year- old mind, it was completely fine. Oh, how things change.

My augmentation was booked and I remember being so excited walking into my surgeon’s rooms in Sydney. We had planned for 400cc textured, round implants that would be inserted under the muscle. I was placed under twilight sedation and the surgery was over in less than two hours.

When I was in recovery, I looked down at my chest, I was bandaged up and had no idea if the surgery was successful or not. It was, and within a matter of months, I had a feature in Zoo magazine plus I had booked a shoot for Brut deodorant. At that stage of my life, I felt that I needed them and that they were paying off. Now, I’m not so sure I made the right decision.

For as long as I’ve known since having my surgery, I’ve been sick. Not a constant sickness but the kind of sickness where people question, “Oh my gosh, you’re sick AGAIN?”

Funnily enough, these are all symptoms of Breast Implant Illness. Something that I thought was a fabrication of the natural health world, until now. I’ve just joined a group on Facebook of 800+ Australian women, dealing with the same type of symptoms. There is also a worldwide group of over 20 thousand women! Including Crystal Hefner, who recently had her implants removed.

Now I’m not saying that every single woman who has had an augmentation will end up with these symptoms, or become ill. Unfortunately, though, it was my fate and the fate of many other women I have connected with over the past week.

I’ve had test after test for my hormones, fatigue and persistent cough. All presenting as completely normal. It’s frustrating because all I wanted was an answer so that my symptoms could be treated. It’s clear now that was never going to happen.

I’m writing this blog post from a hospital bed. My left boob blew up like a balloon and is filled with fluid. I had symptoms of infection and am on IV antibiotics. They’ve drained some fluid and have sent it away for testing.

I’ve also been informed that textured implants carry a risk of BIA-ALCL or breast implant-associated Anaplastic Large Cell Lymphoma – cancer that appears as swelling due to an accumulation of fluid. This testing has been included with the bacterial testing and I am currently waiting on results. I was not notified of this risk at anytime during my pre-surgery consultations. After speaking with quite a few of my friends and family who also have breast implants, it seems that they weren’t made aware of this either.

Now it’s up to me to make a decision about what I will do going forward. Choose health, or choose appearance.

If you had asked me before I had my daughter Lola, it would have been appearance. There is no way I would have felt confident enough to embrace my natural body and I do love my DD’s.

Now, I’m choosing health. Why? Because I need to be the best Mum and Wife I can be and being sick all the time isn’t going to help me do so.

My doctor has scheduled explant surgey in a few weeks time. I’m looking forward to being able to buy non-stretchy dresses that fit around my chest. Look at the positives, right?

I’m sure it will be a bumpy road to acceptance of my new (much) smaller cup size but it’s a road that I’m willing to take as right now, health comes before anything else.

If you know anyone who has implants and is experiencing any issues, feel free to share my story my story with them, or point them to the links below to find out more information.

Lauren Eccleston is a work from home, Mum to one who lives in Country NSW. Originally a city girl, Lauren is not only adjusting to country life but also Mum life.  Find her on Facebook, Instagram or visit her website Peanut Butter Push Ups

If you have suffered similar please let us know.

Read more from Lauren: “Being a Mum is Not Hard. Stop Pretending it is.” Oh no she didn’t!

This post originally appeared on Peanut Butter Push Ups and has been republished with full permission.