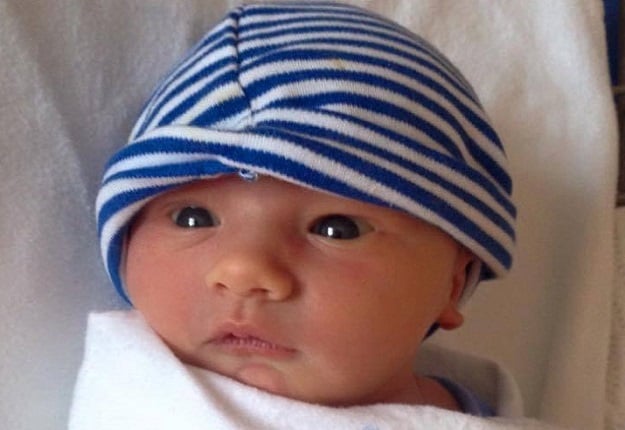 On the anniversary of the death of their baby boy from Whooping cough, Riley’s parents share how his loss has “left a huge un-repairable hole in our hearts.”

It’s a bitter sweet year for Riley’s family. They recently shared the exciting news of baby number three due later this year. They also should have celebrated Riley’s first birthday last month.

Riley passed away from whooping cough on the 17th of March, 2015. He was just four weeks old.

Catherine Hughes has posted a message on the Light for Riley Facebook page to commemorate the anniversary of Riley’s death.

Today it has been one year since we held you as you left this world, and left a huge un-repairable hole in our hearts.

We whispered promises to you which we have tried to keep. All the time we would have spent cuddling you has been channelled into trying to sure this doesn’t happen to other undeserving babies and children. We are so sorry it happened to you. It has been a hard year for us.

You have been loved by more people than you ever got to meet. Your sister talks about you all the time, she loved being your big sister, even if it was just for a short time. She loved you so much she even was excited to help change your nappies – that is love, coming from a three year old!

We’ve been replaying in our heads over and over those last few days and hours with you. Even though you died sleeping, Our greatest hope is that you could feel our love and hugs and cuddles as you left us. I hope you heard the lullaby we sang as you drifted away from us.

We love you so much. 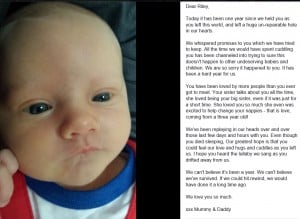 Catherine previously told the ABC that something needed to be done to target “belief systems: undermining the vaccination effort.”

“I think greater education is needed in schools,” she said. “Losing Riley was the worst thing we’ve ever experienced, and it doesn’t need to happen,” Catherine said.

“Watching your baby gasp for breath and being told your baby isn’t going to make it, … it doesn’t need to happen.

“There is prevention available. [It was] not something that I was offered but now every woman in Australia has access to pregnancy vaccination, which means the babies are born fairly protected [from] the disease.”

Our thoughts are with them all today. We hope they celebrate in a very special way.