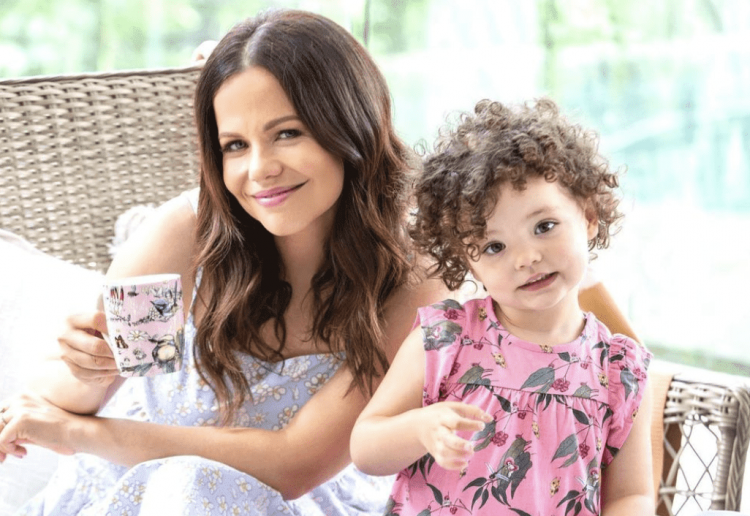 For well-known actress Tammin Sursok, embracing the gentle world of Cuddlepot and Snugglepie as an ambassador for the new May Gibbs lifestyle range, has been a welcome change from the harsh realities of life.

Best known for her roles on Pretty Little Liars and The Young and the Restless, Tammin and her young family this year relocated back to Australia after 15 years in Los Angeles. However, like for so many, it’s been a year filled with ups and downs.

“We sold everything in the States back in October 2020 and moved to Brisbane this year so I could shoot a film. But then lockdowns happened and we’ve basically been stuck here ever since. Just prior to that my husband Sean also got COVID, so that’s been really challenging,” Tammin says.

Here the mum of two tells us about her new role with the May Gibbs brand and how her family has been keeping strong.

You were born in South Africa, raised in Sydney and have lived most of your adult life in the US. Why is it important to share something as quintessentially Australian as Cuddlepot and Snugglepie with your daughters Phoenix, 8, and Lennon, 3?

It just brings up so much nostalgia, and I feel like I’m handing down a part of me which has gone into their hearts and souls. You always want your kids to experience the same magic you experienced in own childhood. We don’t live a very typical life in that we travel around with our productions as Sean is a producer-director as well. So, it’s important the girls know how I grow up and what my roots are.

The new revamped May Gibbs designs are currently featuring on kids clothing, crockery, blankets, pillows, cushions, colouring books and Santa sacks. What do you like about the brand?

The illustrations are so sweet, recognisable and really enhance the vivid tales. Plus, I love how the stories are all about friendship and resilience whilst showing kids just how beautiful Australia’s native flora and fauna really is. The new collection looks so classical and elegant, featuring the dreamy khaki, brown and grey tones of our bush, but with a bit of a modern pop of colour here and there as well. They’re so well designed, you can really treasure everything and pass them down to generations – I certainly will be.

Sean got COVID in January this year. How is he doing now?

He was over the worst of it by March but he still has some long-term effects. He developed some kind of inflammation in his body and joints and has become allergic to certain foods. Every time he eats something his stomach is in a lot of pain so we’re doing currently doing testing. We don’t know what part of his body it will inflame next.

That’s been the biggest issue through all of it – not knowing how it’s going to affect you. My husband is young and had no pre-existing conditions but it was really hard on his body. In the States we knew so many people who got Covid and for some it wasn’t an issue, whilst for others massive. It was a wake-up call for us, we were like, ‘Oh my god this is really dangerous.’ The kids and I were really lucky not to get it.

You’re in Brisbane, but your parents are in Sydney – have you managed to catch up with them?

Unfortunately not! When I got word that I’d been cast in this film in Brisbane we had 48 hours to turn everything around, get on a plane out of LA and go into quarantine. However, as the borders have been shut we’ve been hunkering up here in Brisbane until they open again.

I speak to mum everyday, but talking to her and dad almost feels harder as time goes on as I so want to see them face to face. They haven’t seen the girls now for two and a half years in person. I’m excited for when the time comes, but also now a bit numb to it, as you just don’t know when there will be more closures. However, everyone is in the same boat. I’m still so glad I’m back here, as there was a lot fear in the States, lots of Covid cases and deaths when we left, so to come here has felt like real life again.

What other projects have you been up to?

Our film Braking for Whales is now on Apple TV and a series I shot called Aussie Girl is being released in the US next month which will be exciting. Plus, there’s a few other shows in the pipeline here. I’ve also been working on my Podcast Women on Top which has been great.

What’s the best and hardest thing about motherhood?

I didn’t know I could love this deeply – it’s such an intense feeling! The hard thing has been retraining myself to parent my girls using empathy and understanding along with consequences and solutions. Instead of just yelling during frustrating times, I try to calm myself down. Like every mum, being a parent is hard, but it’s also so rewarding.

The latest May Gibbs collection is available from Big W.