Article “There’s cars and dinosaurs why would you want that girly toy?” 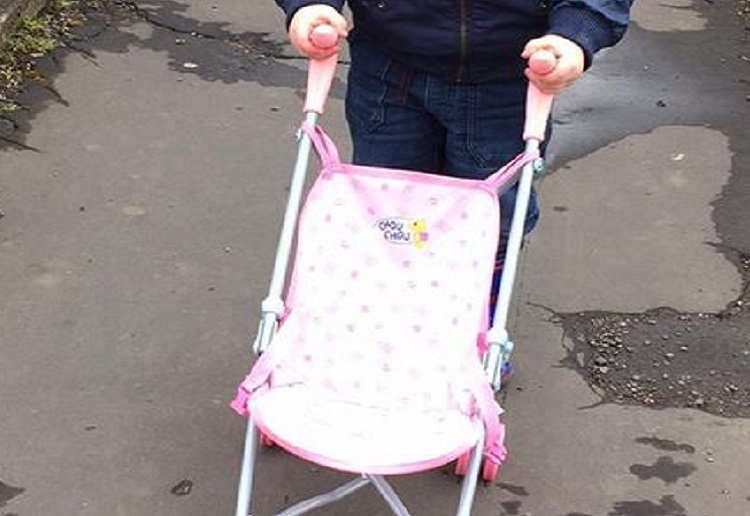 Mum’s open letter to the lady who “belittled” her son for choosing a pink doll’s pram.

Rheann MacLaren, 25, was browsing a children’s charity shop in Scotland when her son Harry started playing with a pram, The Mirror reports.

As little Harry, 3, pushed the pram around the shop, Rheann claims a “frowning” customer came over to confront the youngster about his choice of toy.

According to Rheann, the customer said: “Oh you don’t want that, it’s just for girls, not boys. It’s all pink and girly,” before suggesting he should choose a car or a dinosaur toy instead.

Rheann said: “I was completely taken a back by it at first.

“I was a little in shock to be honest – not only that someone actually believes those things in this day and age, but that they thought it was okay to approach a young child they don’t even know and try to embarrass or shame him into not buying the toy he wants.

“Harrys always enjoyed playing with a wide range of toys, he’s just a normal kid and loves to play.

“He has cars, dinosaurs, dolls and teddies; we’ve always encouraged him and gone with what he’s shown an interest in.

“No child should be put down for having an imagination and wanting to play.”

“To the customer in the toy shop:

I saw the looks you gave me and my three year old son today. I saw the way you watched him pick out the pink dolls pram and push it round the shop with pure joy. I saw the way you came over frowning at a child simply enjoying a toy. I listened as you tried to belittle my son for his choice of toy.

“Oh you don’t want that, it’s just for girls, not boys! It’s all pink and girly. There’s cars and dinosaurs over there, why would you want that girly thing?!”

That’s what you felt you had the right to say to a small child who you’d never met before in your life. I was about to have a go at you, tell you off for being so judgemental and critical of a small child – but my boy got there first, and answered you so much better than I could’ve;

It’s literally that simple. It’s not about the colour of it, the labels behind it, the way it looks… It’s about the fact my child looked at it and thought it looked fun to play with. He pushed it all the way home from the shop proud as punch with his new toy, he told me about how he’s going to put his baby dolly in it and push it to the shops for its milk, because yes, shock horror, my son has a dolly too. His favourite toys are his cars, his trucks, his bus… He love dinosaurs and monsters, he’s happiest when he’s outside playing in the mud and puddles.. But sometimes he likes to play with a doll and pram, he’ll play in the toy kitchen and pretend to do ironing, he likes pink things and watches with fascination when I put my make up on.

Am I worried? No, not in the slightest. My child will grow up a well rounded, accepting boy who will NEVER feel pressured to conform to gender stereotypes.

I really hope you saw how happy he looked as he walked out the shop with his girly pink dolls pram and think twice about saying anything similar to a complete stranger again.”

These stories seem to be occurring far too often! We recently shared the story of Shona Campbell who arrived to pick up her three-year-old son from childcare only to over hear a conversation about her toddlers choice of socks. Yes. SOCKS!

There was also an awesome story a few months back of the dad who let his son dress up as Elsa. And the Mum who tells her boys they look beautiful wearing trousers or a dress. WINNING!