Article This toy has parents outraged – but it’s not what you think! 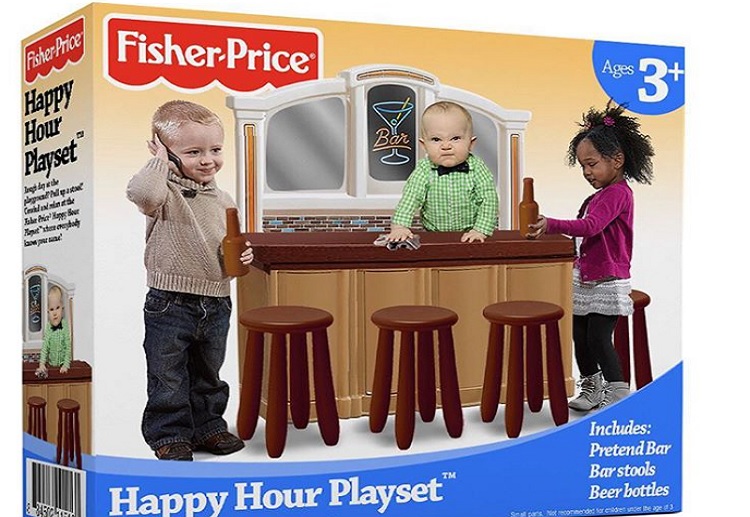 Parents have been outraged by a new toy on the market – but as Mashable discovered, it’s not what you think.

Adam Padilla, the Co-Founder and Director of Branding for BrandFire, is actually responsible for the image.

It’s all just in good fun.

Adam made an image of a Fisher-Price Happy Hour Playset in Photoshop; the playset supposedly features a bar, stool and plastic beer bottles for kids to play with.

“My 21 month-old daughter gave me the idea while playing on her kitchen playset at our apartment,” Adam told Mashable. I mentioned to my wife, Willow, that it would be hilarious if a major toy company created a bar set for toddlers.

“The next day I Photoshopped the package design and posted it on my Instagram with a caption that made it seem like it was an actual product. Many of my fellow ‘meme friends’ like black_humorist, thedailylit and highfiveexpert got a kick out of it, but it really took off the next day when someone posted it on Facebook and Reddit.”

Many social media users were actually wishing it was a real product.

“The reaction has been absolutely incredible,” Adam says. “Most people recognize that it is a joke, and think it is hilarious. Many of my close friends have seen it passed around their individual social circles with comments like, ‘you should buy this for your nephew!’ It seems that people really got a good laugh, which is awesome.”

However some parents posted on Fisher-Price’s Facebook page expressing their concerns over the product. “Fisher-Price even issued a release that recognized the humour and assured parents that they are not involved in the parody,” he told Mashable. It’s refreshing to see a major brand so hip to culture that it took the joke in stride and reacted in a very human way … with reason, humour and intelligence.  But overall it has been a lot of fun to see the story go national.”

A reminder of how it’s important to be vigilant on the internet.

“It goes to show the power of the internet to take a story viral,” Adam says. “The right mix of pop culture and realism, with a bit of technical skill can really send something around the world pretty quickly.

“It’s amazing to see and hopefully can inspire some creative thinking out there. Most importantly, I feel like it’s crucial to scrutinize what you see online and not be too quick to accept things as factual just because you saw them posted someplace.

“Use your judgement and be smart about what you read. A lot of this is just common sense.”

What do you think? Would you buy it?