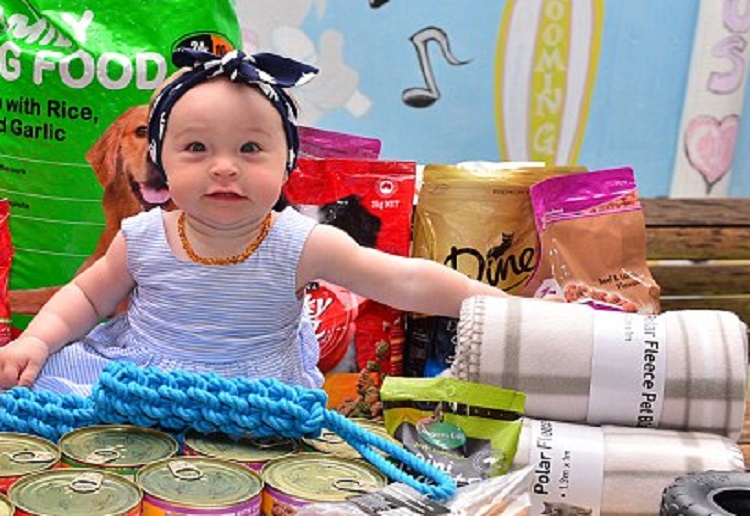 Little Esme Aspland unwrapped about $500 worth of cat biscuits and dog food for her first birthday. Why? Cause she has awesome parents!

Mum Rachelle asked her friends to bring donations to Sunshine Coast Animal Refuge for her baby daughter’s birthday because she already has everything she needs.

‘We had her first birthday on the weekend and people kept asking about what they could bring her,’ Rachelle told Daily Mail Australia.

‘I sat down and realised that she doesn’t really need anything. We had already given her everything that she needs.

‘She loves dogs and, after a bit of a think about it, I figured she would love to see the dogs and cats at the animal shelter.

‘So rather than asking for people to bring her presents, we asked that they bring cans of food and toys for the dog and things they can donate.’

Rachelle said the gesture was not about being mean or cheap, but instead an attempt to teach their daughter about the value of generosity.

‘We just thought it was a nice idea rather than getting a house full of presents and clothes and stuff she won’t wear.

‘We’re just trying to teach her that it’s nice to give as well as receive.

‘As long as she has a roof over her head and dinner on the table, that’s what she should be happy with.

‘Rather than spend $30 on a present that would just sit in a cupboard, we just thought we’ll do something nice for her.’

As Esme gets older Rachelle said she will get more than cans of pet food as a present.

‘I’m sure we’ll reach a point where she will say what she can like,’ she says.

‘And we will always make sure she never goes without anything that she needs.’

However, her parents will also continue to teach her that giving a gift can be better than getting one.

‘If she grows up to know it’s better to give than receive, we’ve done our job as parents.

‘I think we’ll also always try and do something for her birthday where she is able to give back.’

Best. Parents. EVER!  This is an awesome thing to do. Have you ever done anything similar?